CJ remains unimpressed with Biden’s plan to appoint a woman as head of the Pentagon. 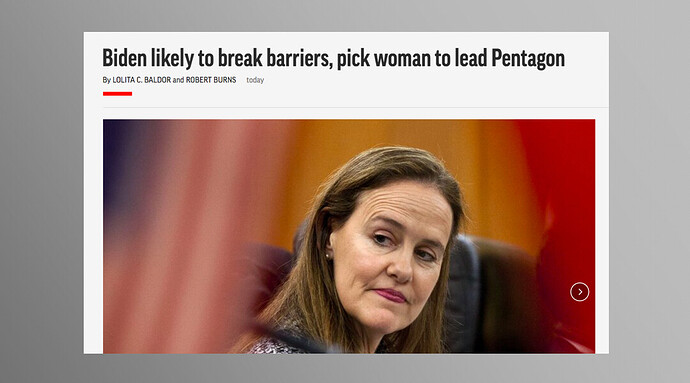 “President-elect Joe Biden is expected to take a historic step and select a woman to head the Pentagon for the first time, shattering one…

Shouldn’t that be “Unconfirmed pretender Joe Biden…”? Just so we start off anchored in the real world. I realise it isn’t Caitlin but the liars at AP putting it like that, but - just saying. Btw, I endorse everything that C says.

Lol - yes, unconfirmed is right. Although by all accounts Biden is on course to be confirmed pretty soon. Almost all of the lawsuits that the Trump side have brought so far have been tossed out of court. In both red and blue states. And of the remaining ones, the Trump team are busy withdrawing their main accusations before they even get to court. Not looking good for the orange baby-man.

In general, though, I agree wholeheartedly with this comment by @PatB. The whole thing is as corrupt as can be from the start!