There Is Something In The Air

I was trying to have an early night, but my cat woke me up as she had a fight with another cat.

The cats, incidentally, don’t seem to be at all effected by what I’m going to talk about here.

My lungs have always been wrecked (from a childhood illness). As such you are always acutely aware of air quality…

Just wondering if anyone else has experienced this.

As an ex-smoker I am more sensitive to pollutants, including pollen, than I think I used to be, no doubt some damage was done. With that caveat, 2022 has certainly seemed worse, so far.

Thinking back exactly two years, when I lived in a more rural setting and came into the (same) town for the pleasure of socially distanced supermarket shopping, there was a very noticeable difference in air quality here. Kind of a ‘tang’ in the air and a sense of tightness… but I wouldn’t rule out some milder form of ‘panic attack’ which I have always been prone to **.

Not sure this helps, but I do get the impression that people are more sensitive to pollutants, whatever the source, than maybe used to be the case.

As an aside, today was the first time in 2 years + that I attended a “round a table just like the old days” meeting. No Zoom, no plastic shields. There were about fourteen people round a large board table, no one was cringing, no hand sanitizer, and only one wore a mask. She unhooked one ear and spoke bare-faced then covered up again which seemed especially pointless.

** I pick up on emotional energies from other people but don’t think this is especially remarkable, I’d venture to say it is a Wild Talent that is socialised out of many westerners, as Charles Fort hinted at. Forgive Wikipedia link but it’s not too bad a precis

Wild Talents, published in 1932, is the fourth and final non-fiction book by the author Charles Fort, known for his writing on the paranormal. Like Fort's previous works, this book deals largely with a number of anomalous phenomena, as well as his ongoing attack on current scientific theories. The book deals for the most part with trying to fit the various phenomena described into Fort's new theory of psychic and mental power – the "Wild Talents" of the title – that are detailed below. As did ...

This is not unusual during winter storms, but in early April, in sunny south west France?

I’m sure you’re familiar with the Maunder minimum. We are just coming out the low point of the sun’s 11 year cycle, so this writer is not too fazed about the weird weather.

Point is, we’ve all lived through sun cycles all our lives. Maybe this is a particularly bad one? As an aside to that we have had an absolute plague of ants since late January. The birds keep crashing into the windows when they’re catching the ants. The trees and plants are budding a month earlier than they usually do here; all kinds of strange stuff going on.

But I’d like to think I have at least a little grasp of human nature. I’d love to know what fourteen people sitting around a table were talking about; and I don’t blame the mask paranoiacs, because of all the propaganda, but viruses get into your body via your orifices, and one of the main ones is your eyes.

Covering your mouth and nose is a waste of time if you don’t also cover your eyes.

Oh, and Karen, I found the link you gave to Fort’s book very interesting.

In the 58 years of my existence I have experienced a lot of what people would call ‘paranormal’.

Maybe you will want to expand on that here or in a new thread.

I’ll give you a quick example: back in the 1980s my cousin and I were hiking on the south coast walk, from Weymouth down to Lands End. We ended-up walking along the rail line from Dawlish Warren, west towards Plymouth (back in the day you could do that sort of thing). It started pissing down with rain. We came across a permanent way man’s hut and took shelter (these huts on the UK railways were for workers who carried out maintenance). The hut was entirely taken up by a table with benches each side. We slid down right to the end of the benches and started brewing-up a cup of tea on our camping stove. Just as the kettle started boiling the door opened and a guy came into the hut. He looked to be late 20s/early 30s and was dressed in Victorian garb. We nodded at him, as you do, and tried to engage in conversation. He completely ignored us, and just sat there on the bench by the hut door. He sat there for about ten minutes, during which the hairs on the back of my neck went up and our camping kettle boiled dry. The guy then stood up and walked out of the hut, back into the rain storm outside.

That’s uncanny Rob, a thread on It Happened To Me might well be very interesting. This was the name of a column, kind of an annexe to the letters section, in Fortean Times.

So here goes: The weird and the eerie

It was a focus group, to start developing a new Information Technology strategy. That’s far too boring so it was badged as Digital Transformation. One might even have subtitled this Building Back Better.

I urged reviewing our “bondage to Microsoft” which raised an appreciative chuckle at my eccentricity. I also cautioned against too much online learning because we’ll get our legs chopped out from under us by institutions with actual prestige. If the selling point is leafy campus with bunnies and squirrels stick to that, because if employability (mentioned approximately every 45 seconds) is the key thing why would any sane student study anywhere but “at” Ivy League?

The desired end result, I can guarantee, will be a zippy one side of A4 summary like this: 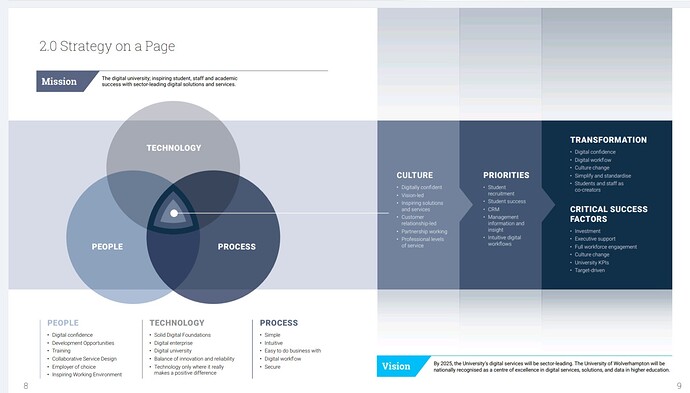 (and continued bondage to M$)