The French Presidential Election 2022 (or, you couldn’t make it up)

Next Sunday, 24th April, is the second and final round of the French Presidential election. The encumbent President Macron will go head to head with Marine Le Pen. Macron is the most hated President in French history. If he wins the election there’s a fair chance it’s been rigged. There’s a whole ball of wool surrounding this, which Gearóid Ó Colmáin dived into on tonight’s (20th April) Richie Allen Show. Gearóid Ó Colmáin is an Irish journalist and political analyst based in Paris. His work focuses on globalisation, geopolitics and class struggle. Both Gearóid Ó Colmáin and Richie Allen are experienced journalists, and they wouldn’t make accussations like this live on air, at the risk of being sued, unless they were very sure of their facts (juicy stuff starts at about 11 minutes in).

Wow, that’s a weird Brigitte take! She’s a man! Or a former man! And no photos of ‘her’.

I don’t know what to think of that.

Meanwhile Le Pen has another disastrous debate performance, cannot seem to be able to ‘attack the weak spots’. Strange isn’t it that she doesn’t hit him where it hurts? As if she is…working to fail?

Le Pen is really a nothingburger in my opinion, and Macron is a slick technocrat/word repeater. They’re both phony as hell in my opinion, both media creations. The real rulers are clearly elsewhere.

Everyman, one thing that is hard to deny is how much the LGTB and trans stuff is pushed in the MSM.

Things are now so mad that you have to put in the usual caveat: I have no problem with gay or trans people, as long as they don’t hurt anyone else/try to force their agenda on anyone else.

But it’s been apparent for a number of years now that there is a quite blatant agenda going on, coming from the MSM, and it goes beyond any rational measure. This includes the normalisation of having sex with children.

This is standard stuff as an empire dies - the corruption and debauchery. The Greeks, the Romans, et al, and I think I wrote somewhere recently about the last years of the Mongol empire, which really was you-couldn’t-make-it up stuff.

I’ve not seen what you wrote about the last years of the Mongol Empire.

Completely agree about the LGBT and trans stuff, it’s everywhere. I think it’s connected to ‘making transhumanism a goal’, because the elite want to use the social wealth to increase their lifespan and delay or rejuvenate their old age. This, like so many policies, would not be readily accepted if it had to be democratically discussed and voted upon. So, they are ‘preparing the mind’ of a target population, all the children who are addicted to tik tok and video games for example, so that in the near future there will be little resistance to overt celebrated transhumanism. It will be sold as medically beneficial, old age will be re conceptualized as a health problem, just like now ‘freedom’ is being reconceptualized in terms of ‘public health’. So prepare for Henry Kissinger still living at 125 years old, and amazingly he looks 35 and is pregnant…and the wifi node in his brain allows him to send mass messaging to every human on the planet…about the necessity for world peace via destruction of a dangerous pocket of resistance to transhumanism deep in the mountains of Alaska.

It’s in a whole other dimension. Witness this for example. As the dim bulbs in academia’s EDI ghetto like nothing better than ripping off each other’s ideas (“sector good practice” they call it) this will be coming to a Ladies loo near me quite soon I expect. 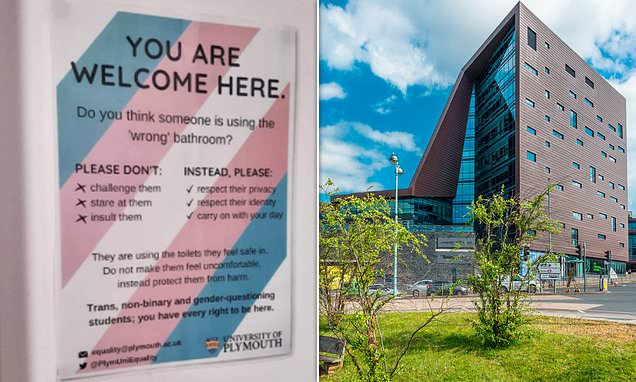 Female students at the University of Plymouth have been told not to confront anyone they think is posing as a woman to use their toilets - and instead 'protect them from harm'.

Early indications are that Macron apparently got 58% of the vote and is the first president in 20 years to get elected for a second term. Ain’t democracy great, although about 30% of the electorate refused to vote, the lowest abstention rate since the 1960s. What could possibly go wrong with the second term of the EU’s and Klaus Schwab’s golden boy… 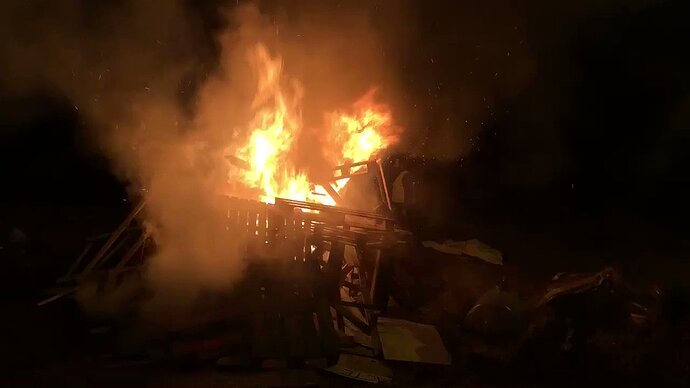 Some interesting stuff about Macron and the “50 senior French military and intelligence officials” trapped in Azvostal at Mariupol. Perhaps Macron was covering his **** about his involvement in sending them there just before the elections, in case it affected his ‘win’.

Much of this is from Vanessa Bealey, without detailed evidence, however based on her track record, I am inclined to believe it. Watch from about 1 minute after the start. 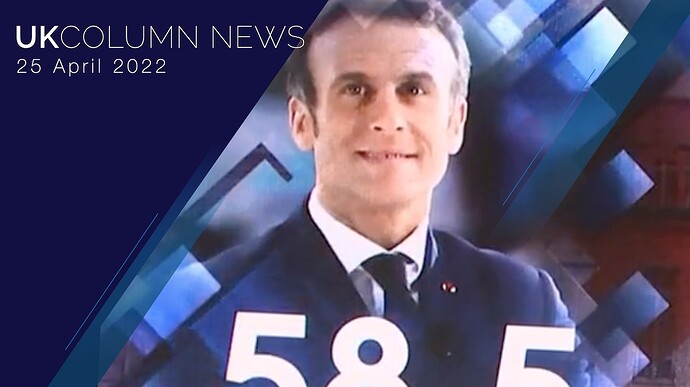 The number of spoiled papers etc ought to count for something. I vote for an actual person (initials CJ interestingly enough, hiya @CJ1) in our town/borough elections because I know the actual person and she’s pukka. Every other election I turn up but spoil the paper, “none of the above”. Pointless, I realise.

I do not grasp the logic of the 50-50 choice in French poll at all, it is surely a deliberate attempt to ensure the ‘least worst’ candidate is ushered in? 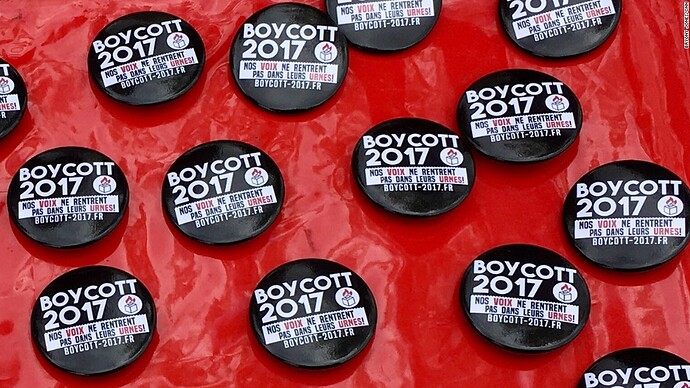 A record number of French voted for nobody

Emmanuel Macron's election in France has been hailed as a landslide victory, but his win was marred by historically high rates of abstentions and blank votes.

I don’t have access to twatter, but perhaps someone else could confirm these images as real? 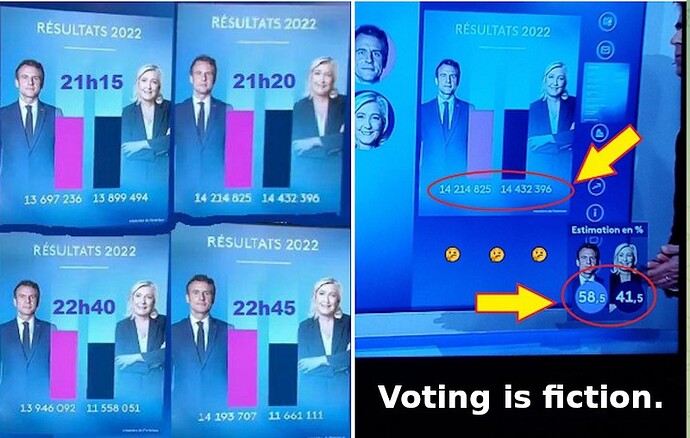 Hi @PatB , unlike the photos of Le Penn, all the images of the french guy seem not to be the same and also don’t seem to look like Macron?!

Pat, I couldn’t really say. All that you can say is that Macron came out of nowhere and suddenly became president of France.

On a perhaps related issue, we’ve just had our telephone/internet service restored after an outage of more than 24 hours. The telephone outage was widespread in our rural area.

I’m now hearing reports that the telephone system went down in several French cities, and many other areas. This all started on Wednesday afternoon through to Thursday afternoon (today).

Some are saying that this was an act of sabotage, by disgruntled voters against the Macron win, or maybe it was sabotage by the Russians. Who knows.

I’ve only just got back online. I’ll try to get some idea of what’s been happening. I’ll give a link, although bear in mind that RFI are a mouthpiece of the French government… 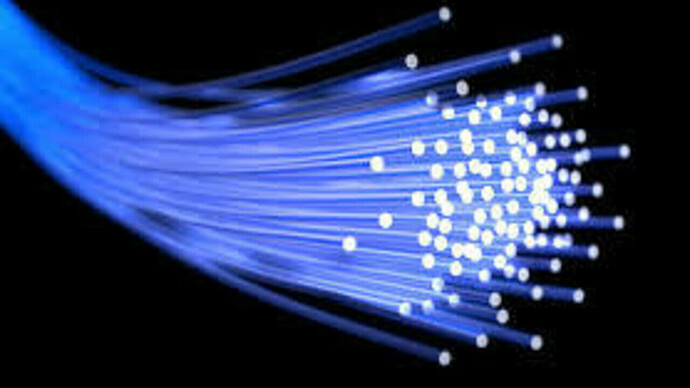 The Paris prosecutor’s office opened a preliminary investigation Wednesday into the suspected sabotage of fiber optic cables, which disrupted the internet in several regions around France, and said the…

In our local area they were fixing telephone cables on the roads, so from that it doesn’t seem to suggest a state sponsored attack on fiber optic cables; more likely sabotage against the miraculous Macron win (the most hated President in French history).

As an aside, our local doctor on Thursday was pulling her hair out, due to lack of internet connection (as were all the businesses in our nearest big village). Our doctor said that telephone cables in the area had been deliberately cut.

Only plausible in less densely populated areas where most localised outages can be ascribed to branches breaking cables in windy conditions, especially when no-one is responsible (or can be bothered to find the cash) for keeping tree growth trimmed back.

Where possible fiber is buried in a sane infrastructure, often using the conduits already in place for gas, power, etc (under roads very often). My older son is a BT engineer, and my father was a telecoms engineer - mainly Plessey in those days. I’m no networking expert myself but know enough to realise that breaking cables only causes short and easily fixed local issues. Only the last few metres in urban areas from cabinet to home/office/whatever might be in exposed cables, optical or traditional copper (cheaper, slower). If you pay a premium 'cos you’re really keen to dominate the n00bs in online games then you can have fiber connection directly to your home.

Cyberattacks would target routers, cabinets, etc. Switching these off is a real easy cheap way to simulate that.

There has been a massive push to install fibre in the rural areas. Mostly underground but some local cables along the aerial telephone cables. I know where the local server farms are and the one with our connection is not locked. It would be easy to take down the whole local area (probably a couple of thousand homes) and make sure it’s not a quick fix!

Im pretty sure the push is not so we can all watch Netflix uninterrupted.

Karen, where I am the phone lines are on fairly short poles beside the lanes. The phone lines often droop down. These phone lines are often taken down when the farmers go in and out of their fields with the forks up on their tractors. The worst year was 2017, when broken phone lines in our lane occurred on three separate occasions. On the third occasion it took the phone company 9 days to fix the line. That was 9 days without phone/internet.

It doesn’t normally bother me. When you live in a remote place like this you have to go with the flow (including power cuts). What was disturbing this week was that the phone outage was widespread across France.

Pat, from what you’re saying you didn’t seem to have the phone outage in your part of the Charente?

Any idea what/who caused it all?

I’m still trying to find out!

An organisation I worked for had main server farm in the national office in Southwark, and backup servers in Telehouse A. It was recommended, but we couldn’t afford, a second set in Telehouse B. A daily courier delivered triply redundant tape backups to another office in Nunhead.

A nuclear strike on South London would have probably got all of them, most other disasters: no worries.

This was a housing association, not even a particularly big one, not SPECTRE

France has now shut down half of its nuclear power stations (by far, most electricity in France comes from nuclear power)… 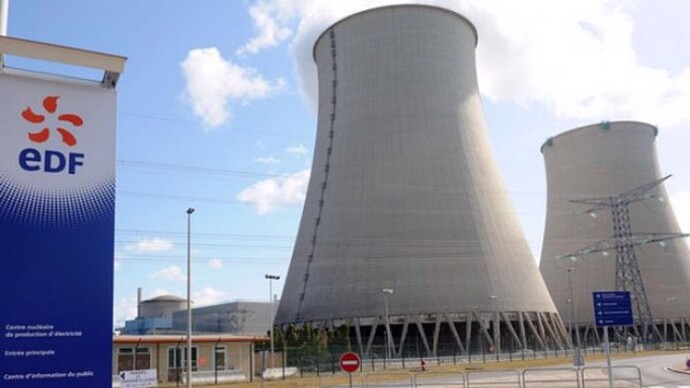 Fifty percent of nuclear power plants in France are now offline for maintenance amid an energy crisis.

This all started last year, but that’s a whole ‘other’ that I won’t get into right now.

What I’m getting at is that last year I cancelled all of our gite bookings, because the situation with all the covid nonsense was so uncertain - everyone got a full refund, no quibbles.

This year we’ve had a huge amount of bookings (people are so desperate for a holiday/normality). It’s looking highly likely that we will be facing power cuts over the coming months. In our location without power you’re fecked. Principally this affects sanitation, because our fosse septic (septic tank) has an electric pump that takes fluids to a soak-away buried under the garden lawn. Our gite can comfortably sleep 12 people. You can imagine how much sewage comes from that. There’s all the other obvious stuff that comes from lack of electrical power - not least no tv or internet connection.

I gave full refunds to customers last year, but I’m not going to give refunds this year, otherwise I will shortly be bankrupt.

It’s not my fault that the world is run by five-year-olds on LSD.

My friends have used compost loos for years, maybe we all should start looking at these alternatives.