Regis Tremblay hosts lab. scientist Poornima Wagh: "There was no pandemic, no virus." 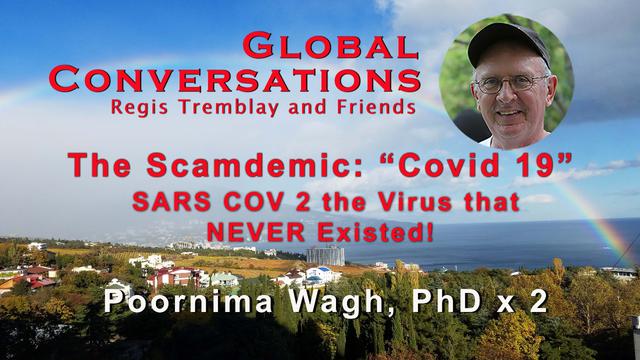 The Scamdemic: Covid 19 - SARS COV2 the Virus that Never Existed

Poornima Wagh, 2 PhDs in Virology and Immunology, 20 yr career as a Lab researcher and scientist, destroys the Covid scam with proof in language even a layman like me can understand. Who benefits? Big Pharma and its owners (not shareholders), Gates,…

Only skimmed through some segments but found her explanation of the isolation process very useful. Helped to embed my rough and ready grasp of how this is achieved. Interesting to note her use of quotes around the word “viral” during the slides that accompanied this part of her explanation.

I bet the people behind the scamdemic never thought that they were going to kick up afresh this old - and previously pretty quiescent - assertion: that there’s no such thing as viruses. And now the accompanying assertion is also getting louder and wider: that there was never any ‘covid’ pandemic.

Did the scammers foresee all this? Or has it taken them by surprise? Either way, these assertions are now well in play. And - it seems to me - they’re growing in credibility. 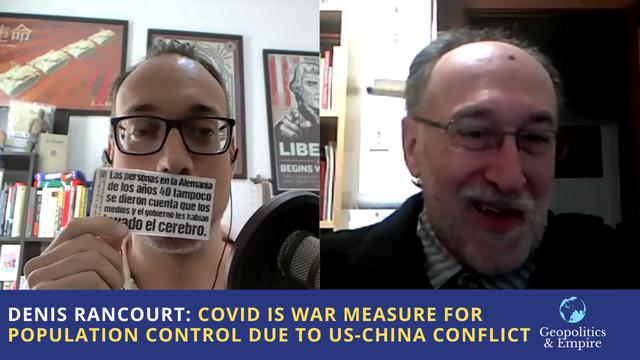 Denis Rancourt: COVID19 is a War Measure for Population Control in Shadow of...

Scientist Denis Rancourt returns to discuss his new paper which demonstrates that a pandemic did not occur. Whereas in some countries there was little to no excess mortality, in others like the USA, the 1 million excess deaths can be attributed dire…

Hi @RhisiartGwilym , it’s good to see credit given to Cowan, Kaufman, the Virus Mania authors and Stefan Lanka - the latter did exactly the experiment described by PW clearly showing failure of Koch’s postulates.

PW takes it further by suggesting reasons for illnesses in 2020 other than a novel virus. I think she missed the northern Italian flu jabs in 2019 that were of a new variety!
Interesting information on 5g masts.

Thanks for posting. I had not heard of Rancourt before the thread on climate change. I said then, he sounded to me like a guy who had no agenda, and talked simple good sense, although that view was roundly criticised on that thread. However, this long interview seems to me to reinforce my view that Rancourt is a bright guy who considers the facts and does not speculate.

Poornima Wagh’s robust style is just what the doctor ordered as far as we’re concerned! Yes CJ, we too noticed she missed out the Italian flu shots. Nobody’s poifect. And all power to Cowan & co. too.

Even as far back as 1954 John Enders, who invented the cell-culture scam that superseded ‘Koch’s postulates’ for the scammers, conceded that his own control experiment revealed no proof of the existence of a virus. That was in respect of measles. His flawed technique also gave credence to the ‘polio virus’ which to this day gives a steady income stream to the mass-murderers-by-vaccine like Gates. (Enders got a Nobel prize for that one. Tom Lehrer was behind the bus.)

Ender’s boost for the fake science of ‘virology’ has enabled the worldwide broadcasting of more premature death and more disability and ill-health among unsuspecting people and more profit for the rich investors in Rockefeller pharmaceuticals than just about any other single thing. What an eye-opener this latest scam has been for us! (These latest scams!).

Thanks for your links Rhis, you sure know how to pick 'em.

It’s because of living in a body in an advanced state of utter bloody decrepitude, A, but with a mind still furiously interested in what’s happening in the world; that and having all my nearest and dearest about seven miles away, and myself living like a recluse. No-one nagging me: ‘Oh do shut the computer down and come to bed, love!’

That’s why you’ll sometimes find me posting at 2AM!

Life, eh? What a bleedin’ comedy! I know the buddhists say that the best course is to get off the Wheel of Rebirth altogether, finally; but I still have plenty of appetite for being involved here, for a few more incarnations yet, I dare say. (I guess the twice-daily doses of my diy cannabis herbal heart-support medicine helps to keep the mood cheerful. Fully de-carbed, natch, so a copious source of daily giggles…

Getting off that Wheel altogether isn’t something many have achieved but there’s a few intermediate possibilities: stream-enterer, once-returner, and the like.

Personally I find the rebirth concept much more useful Here in the Now. If there is an I, this entity is very very similar to the one that started typing this reply, but not exactly the same. A bunch of memories and habits and volitions etc were passed across as the brain cells fired but not quite all of them, and this lets us hold on to the hope of progressing, causing the least harm, maybe even benefitting the world, before the screen finally blanks. That in fact is karma, not this simplistic reborn as a frog nonsense.

Does the screen finally blank? Is that parinirvana?

When I find out it will be too late to tell. But I should imagine so. But maybe there’ll be a little white dot like on the olden days tellies.

As for parinirvana: no. That applies only to fully enlightened ones (ie folks who achieved nirvana) and then subsequently pass away for the final time. I don’t think there’s a list, but it won’t be a long one.

It’s the practice that matters not the getting there, but that sounds horribly mealy mouthed so I’ll stop right there 0:-)

Thanks for the Regis Tremblay video above Rhis; dynamite indeed and a whole load more here! I never had the covid shots and I won’t be having any “vaccines” for anything from now on in. 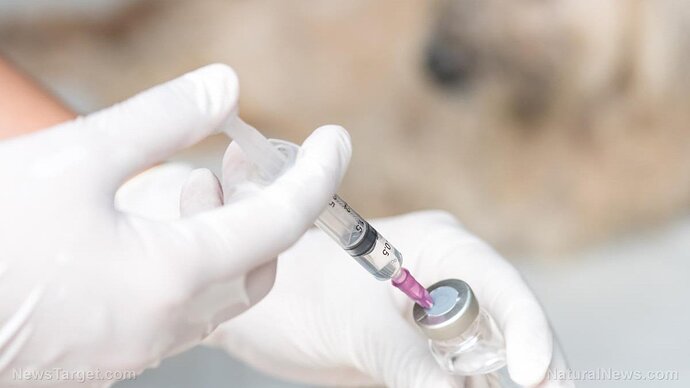 The Dogma and History of Vaccination. Questioning "Germ Theory" is a Taboo -...

All Global Research articles can be read in 51 languages by activating the “Translate Website” drop down menu on the top banner of our home page (Desktop version). To receive Global Research’s Daily Newsletter (selected...

Hi @RhisiartGwilym , I had never seen or read any Poornima Wagh material before your post - thanks for that.
I looked at her follow up videos with Regis Tremblay but also this one with Dr Lee Merritt - from 1hr 11min in PW describes what she has found inside the so-called covid vaccine by actually using tried and tested lab procedures .She states clearly that all the examples tested from all the big pharma firms contain the same materials maybe in slightly different proportions. BUT SHE FOUND NO SIGN OF ANY MRNA or SPIKE PROTEINS coded to any MRNA “zippo”, ONLY the synthetic lipid nano-particle REDUCED GRAPHENE OXIDE, HYDROGEL, and MASSIVE AMOUNTS of METAL CONTAMINATION!
PW points out that graphene oxide has a tiny amount of Positive charge which reacts with the body’s negative charge.
The jab is a chemical weapon injecting us with toxins and not a bio weapon! 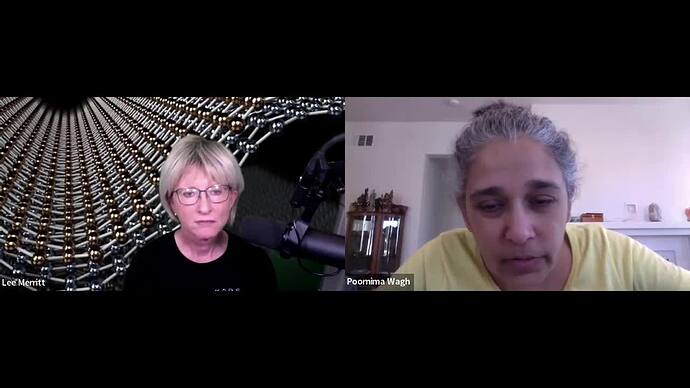 PW ends up by ridiculing most of modern science not just virology!

Also found on Global Research. (Not sure if this has been posted here before; needs seeing though): Children more likely to die after poison-stabs than un-stabbed children:

The UK Government has quietly confirmed that the Covid-19 vaccines are killing children at an unprecedented rate. Shocking figures contained in an official report, published just hours before Boris…

Excellent find C! Poornima is my sort of scientist. Conversation is two hours long: worth every minute!

I think the Expose are overshooting here Rhis. In the ‘dying of Covid’ part they definitely are, their claim is based on a very thin data set that should not be presented as a graph.
While their conclusion regarding non-covid deaths or all-cause deaths might be the truth, I don’t think the truth can be found in the ONS data. If you do it properly you don’t get the outcomes they claim, at least I couldn’t. This also happened when I tried to replicate the Expose’s last couple of splashes (like this one, which I now think I wrongly endorsed Mortality lowest amongst un'vaccinated', according to official government figures - The Expose - #3 by Evvy_dense). To be fair this was with complex data (all the different doses) which I think is being widely misinterpreted, but in general I think their conclusions are at best overclaimed.
The Norman Fenton team highlighted biases in the ONS data - because the vaccines appear to reduce even non-covid deaths, which they sarcastically termed the ‘immortal effect’. This arises due to pockling. Mathew Crawford calls it data sieves - little fiddly interventions to prevent the main unwanted effect from appearing, but which results in other false/impossible effects popping up. These reveal the bias, but also that the truth is disadvantaged to the point of being out of sight.
Cheers