In a Highwire exclusive, Deborah Conrad, a hospitalist physician’s assistant on the frontlines of the pandemic, pulls back the curtain on the complete lack and disregard in her hospital for reporting Covid vaccine injury to VAERS, this country’s only mechanism to track the safety of these rushed-to-market, mandated products. In riveting detail, including emails & recorded phone conversations, Conrad exposes the internal push to turn a blind eye to injuries and “tow the company line” that this vaccine is safe.
Link: https://media.livecast365.com/highwire/thehighwire/content/1631924899994.mp4

The ‘whistleblower’ wasn’t just blowing a whistle - she persuaded her hospital to track the vaccination status of all its patients (imagine a hospital needing persuasion for that); it was discovered that 90% were vaccinated, although the catchment is supposed to be 50-50

Everyone missed this one... vaccinated people are up to 9X more likely to be...

There was a hidden gem in a blog post by Aaron Siri that nobody picked up. It was evidence that vaccinated people are 9X more likely to be admitted to the hospital than unvaccinated.

In other developments, Aaron Siri’s advocacy firm got involved representing Deborah Conrad; the exchange with the hospital and health authorities reveals protecting confidence in the vaccine is more important than the legal requirement to report vaccine reactions.

Whistleblower: FDA and CDC Ignore Damning Report that over 90% of a...

She has since been fired.

" The state’s largest health care employer, Northwell Health, was the first to confirm that it had fired about two dozen managers on Monday for not getting the shot. While Northwell, which employs 76,000 people statewide, has begun the process of firing the rest of its unvaccinated staff, it would not provide numbers on just how many workers it would lose. Erie County Medical Center had suspended about five percent of its hospital workforce, or 176 employees, in addition to 100 staff members at its long-term care facility. The employees will have 30 days to comply with the mandate before they are fired, according to a spokesperson. Hochul has said that health care workers fired for refusing the vaccine will not be eligible for unemployment insurance without a valid accommodation signed by a doctor." 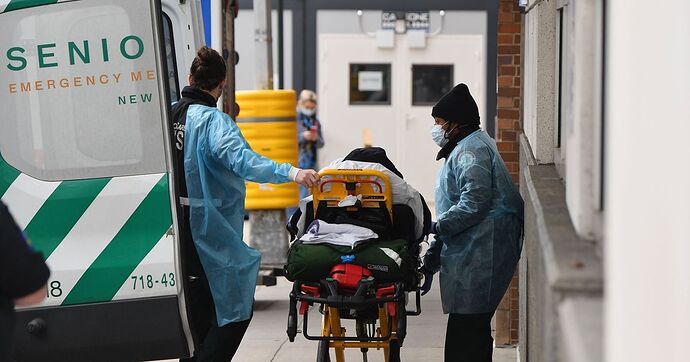 Hospitals are holding on so far, after the mandate to get the shot took effect at midnight.

Perhaps the most nauseating part of listening to Deborah’s testimony to Del was those phone conversations, where the ‘management’ jobsworths - or should that be careersworths - were doing standard MBA biz-waffle speak, when what they were really saying, putting it as plainly as George Carlin would, was: ‘Get back in line, bitch, or you’re out!’ Which she duly was.

We need many Nurnbergs to bring these cringing cowards to book. They deserve no less, considering all the death and crippling which they’re enabling. Not to mention the international coup d’etat attempt which their wilful hearnospeaknoseeno blindness is also assisting by their gross dereliction of duty, honour and intellectual honesty.

I get less and less able to stand such mealy-mouthed insincerity.