These Fragments We Have Shored Against Our Ruin

Just nicking a bit of TS Eliot for this thread’s title - it seems apt enough.

I do like the way some of the threads about deadly serious matters are derailed with spluttered interjections about this band, or that book - or whatever. Long may those palette cleansing derailments continue.

However, I’m creating this thread in the hope that we can amass an archive of things that have sustained us in mind and spirit throughout our lives. Just an opportunity for us to toss any old thing into the mix.

To that end I’m going to make an opening deposit. Ordinarily I stuggle to make it through this performance of Rocky Road to Dublin without having a bit of a weep - I find the footage so deeply effecting - - here’s a thing, I’d not watched it for a couple of years, then stumbled upon it sometime mid 2020 when the awful ramifications of the C19 agenda, and where the inhumans were leading us had really hammered home here – seeing this video destroyed me - I had the terrible sinking feeling that I was looking at a world that, if not already disappeared, was slipping out of view.

I remember - indelibly! - sitting in on just such a live session in a packed pub in Ballyferriter over in the far South Western Corca Dhuibhne gaeltacht in Eire, with three - sic! - Uilleann pipers. Wonderful, unforgettable evening.

That sort of thing seems so deeply-embedded in Eireannach culture that I can’t see it fading out any time soon. God forbid! (Walked smack into the stowed mast of a sailing dinghy on the way home. Sober as a judge, I promise.

Culture and politics are the same thing really: ways of being, habits of thought, etc. I think that’s why veering off into books, films, etc, is both interesting and enlivening. Politics with a big P is simply power, corruption, and lies. I think Orwell coined the phrase and his writings helped to open my eyes as a teenager. I started with Animal Farm, then Nineteen Eighty-Four, the easiest works to find, and then discovered our school library had the collected essays and journalism and I took it from there.

The clip, and what it represents, reminds me of GO’s piece The Moon Under Water. If you’re not familiar with it here’s an online version

The Moon Under Water | The Orwell Foundation

Orwell's classic essay on his quintessential English public house. Other pubs are available.

To walk into some contemporary pub (which personally I very seldom do) would have him in a stupefied horror. People shouting at the tops of their voices to make themselves heard, glaring and aggression, girls swearing, and constant twiddling with phones.

The last two pubs I frequented at all regularly were in Gillingham. Forget all that Garden Of England bs, Gillingham is a rough old town. One of them, The Monarch, may still be going. It used to be full of undercover cops trying to entice you into an amphetamine score. The other, The White House (really) has long gone and the site is now part of a white elephant student flats complex. (The greater part of the site was Akzo Chemicals, but the university probably doesn’t highlight that in their web pages). I say white elephant because it’s seldom more than half full and has always struggled to break even.

I represented union members at the meetings where the closure of the embedded bar and grill was negotiated. Never turned a profit, even when they got the obligatory massive flat screen and Sky Sports.

(Now how’s that for a stream of consciousness lol)

Orwell’s novels are worth the time too. Very much as you’d expect them to be.

Nice one, K - I’d not read that Orwell essay - he nicely conjures what to me is the ideal boozer. I don’t go out to pubs very much at all nowadays. We are often invited to political-type gatherings which always seem to be held in those Wetherspoon style gaffs - tbh, I abhor them - those places have no soul imo - there’s a distinct lack of that ‘atmosphere’ GO refers to - - ‘cheap and cheerful’ according to the fans of those sprawling holes - just pain old ‘cheap’ in my estimation!

Steve Earnshaw (retired) was an academic I worked with quite closely when I was involved with Humanities at Sheffield Hallam - he did some smashing writing about pubs, and I would recommend his book The Pub in Literature: England's Altered State - Steven Earnshaw - Google Books

Snap on the Animal Farm and Nineteen Eighty-Four - those were the first 2 I read (though strictly speaking AF was read to us in primary school when we were 8 y o !)
I have a particular liking of his experiential books, Wigan Pier, Down and Out, and whatnot: informative and moving in equal measure.

Many thanks for that stream of consciousness : )

Never thought of Homage to Catalonia as whatnot before. First time for everything I spose.

…there’s another fragment for the keeping.

I’ve been in a few pubs like that. In fact, thinking about it, everyone used to sing in pubs (I’m talking about London here).

I’m sure such pubs still exist in the British Isles, in tucked-away places.

everyone used to sing in pubs

Back in the early 80s-90s I used to frequent a lovely old boozer called the Ring O Bells in Bradford city centre - quite a large coaching house affair - there was an old Dear (the lady must have been in her 70s when I first saw her) regularly sat at the piano rattling-off the oldies - she was great fun - she had wing mirrors mounted on the piano so that she could keep an eye on the goings on behind her and if she caught your eye she’d give you a saucy wink - - most punters would buy the lass a drink so the top of the piano would be loaded with glasses of her tipple, G&T - of course everybody joined in with the singing - - the boozer was long ago demolished.

Ah, Bongs Of Fury, I should give that a play more often.

I expect folks may have seen this great Zappa pic before, but it bears repetition. I think I was mid-teens when I heard one of the live albums for the first time. Yellow Snow was especially memorable, and the one that goes “He was the playboy type, he smoked a pipe, his favourite phrase was outta sight”. Which has a happy ending.

Several years more before I braved the Captain for the first time. 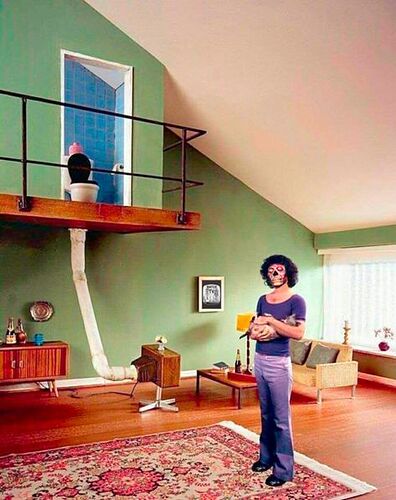 In another thread I mentioned Inner City Unit’s wonderful punky version of In The Mood.

It’s a rubbish recording which starts rather abruptly but a marvellous showcase anyway for the late Nik Turner (on the sax). 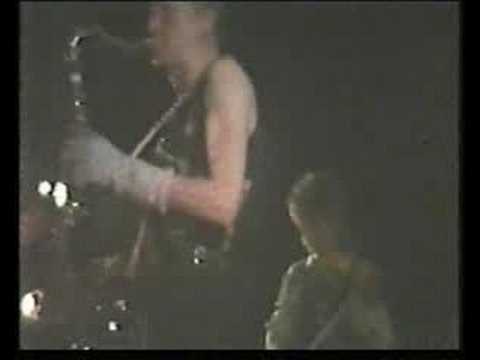 Excellent addition, K. I was saddened to hear about Nik’s passing.

I saw ICU supporting Sham 69 in 1980 at Bradford St George’s - the Sham set was spoiled by the worst violence I ever saw at a gig - the NF and SWP turned up in big numbers - when Sham took the stage the rucking kicked-off proper - each group positioned themselves either side of the hall, chanting at one and other and steaming-in to fight in lumps in the middle of the hall - Jimmy Pursey had to keep stopping the band to remonstrate with the aggro merchants, to no avail - - I don’t think a single song was performed in its entirety. Naturally those of us who were there for the gig had a miserable time - I just cowered at the back of the hall - those who’d gone up front were in an almighty crush as the crowd pressed forward away from the fighting - many had to be pulled onto the stage - - my mate Dave Maud passed-out in the crush, was lifted onto the stage by Jimmy - Dave said afterwards that when he came too, Jimmy was there asking if he was ok, and gave him a bottle of beer - Dave dined out on that story for yonks.

But the ICU performance was something else. Their stage set was stark - no lighting apart from a huge single light bulb that swayed from side to side throughout their set - kind of like the opening credits to the Edgar Wallace Mysteries - all the band were wearing black overalls - - I’d never heard them before - they blew me away.

Here’s a neat piece of writing about ICU’s support for Sham on that tour: https://gpwayne.files.wordpress.com/2016/11/viking1.pdf

Cut to several decades later, I had the pleasure of sharing a stage with Nik Turner (Nik Turner Set) in 1989 in the Last Bus Shelter at Havens Oust in Amsterdam - the LBS was set-up by a bunch of Bradford/Shipley ex pats - amongst them was Ady Parkin - for Ady’s 30th birthday we (Zed), The Levellers, and The NT Set played a surprise gig for him - - it really was a great night - first time seeing The Levellers, and I thought they were ace. Nik looked a real Bobby Dazzler in his electric blue drape suit, leopard skin brothel creepers, and a huge DA with bright green highlights - I shared a spliff and beer with him and had a nice chat - I reminded him about that Sham gig and he said that his band steered clear of the venues as much as they could because they were aware of the ‘bummed-out scene’.

That photo of Zappa has been tampered with - here it is with Frank’s lovely fizzog intact : ) 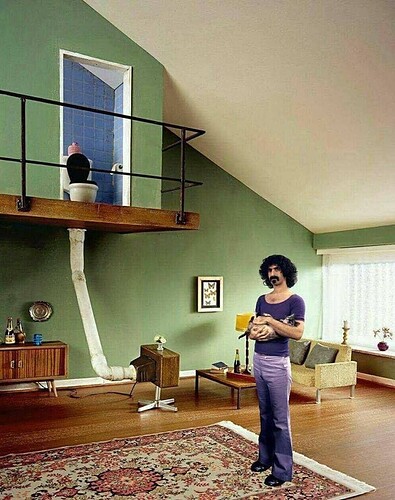 Downloaded to Kindle, thanks for that. Coz 4 aforementioned put me on to ICU. He was a mad fan of Hawkwind too (I think this was a Peace Convoy/Stonehenge Festivals thing - being not many miles away across county).

My bad. I didn’t check that carefully enough.

If anyone has seventy quid that’s burning a hole in their pocket this might be quite a good buy. 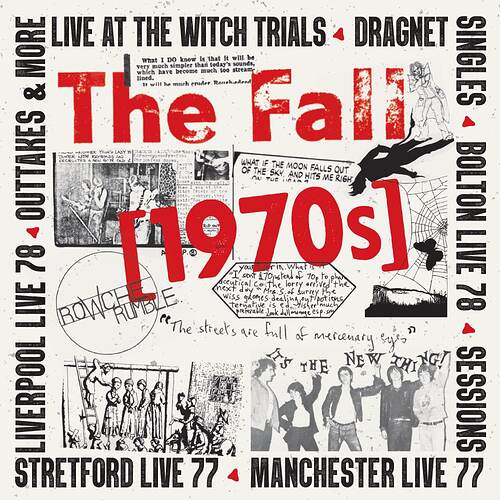 • A 12 CD box set. • The Fall’s 70s box set combines all of the band’s work in that decade. • Featuring the albums ‘Live At The Witch Trials’ and ‘Dragnet’. • Plus all of the singles from the time. • And eight live shows – many have been...

Not for me though: too impoverished, but in any case I find The Fall work best in small doses. If you played all the discs in the box set one after the other it would quite possibly add up to more time than several erstwhile members of the band lasted under MES’s tyrannical yoke

Elsewhere I mentioned the 10" EP Slates, which features a half-dozen or so tracks, this being at the end of the A-side. 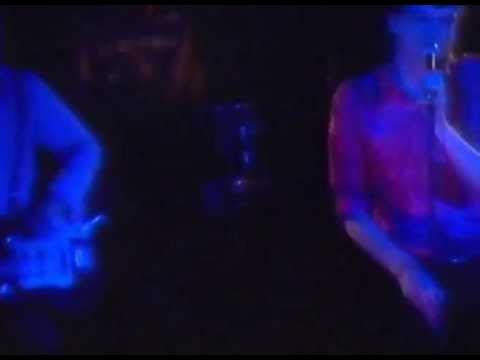 Ha - I bought a hardback of that when it came out - then a few years later I saw the updated paperback in a charity shop - it says on the cover, ‘NOW with added ex-members’!

Slates is excellent, and you selected the best track from it…imo

Anyone clocked - in that pic of Zappa - the weird tv (if that’s what it is) with, apparently, a chimney leading from it, up to the next floor; where it appears to end in a loo.

Am I going mad?

I took it as an early media analysis?

Zappa was something else; way ahead of the curve.

In a similar vein, I was talking to someone about this over dinner this evening (which at the time of writing is now yesterday evening); RE the education system, which basically boils down to obey authority, pay taxes, don’t question anything.

I would guess that Zappa never had much of a formal education.

Yes, that’s the version I’ve got.