The trial and sentencing of Didier Raoult, enemy of the people

I saw a video a couple of days ago about Didier Raoult’s trial result, which came to court back in October in Bordeaux. It began as a suit by doctors in Bouches de Rhone last December, in which Raoult was accused of using an unsafe and unregistered medicine endangering innocent patients, and of fabricating evidence to show HCQ was effective. In response Raoult noted that the complaint came from doctors not patients, and that out of 600,000 who had passed through the IHU, none had complained of improper treatment.
The whole thing is such an abomination and an injustice, yet his many supporters seem to be making little noise, or at least I can’t hear them. If any of you French expats have heard anything I’d be interested.

Worse is that his advice would be really useful just now, but he doesn’t have an easy outlet for it any more.

I don’t know the current status of Raoult, but David Noakes is still in prison. I think his French partner may also still be in prison. He was arrested in the UK and served time in prison and then the French issued a European warrant for him (supposedly used for murderers and terrorists) and was handed over to the French and on the same basic charges. Now the Swiss are jumping on the bandwagon, so triple jeopardy.

His crime? Selling (and sometimes giving away to those who couldn’t afford it) a cure for cancer with plenty of evidence for its “efficacy” (somewhat better than the Coroni jab).

Haven’t seen clear accounts but it seems they are running with the HCQ accusation as the principal one - “unproven”, “unethical” and all that nonsense. “Charlatanisme!” Yeah Didier Roult is a charlatan, right. 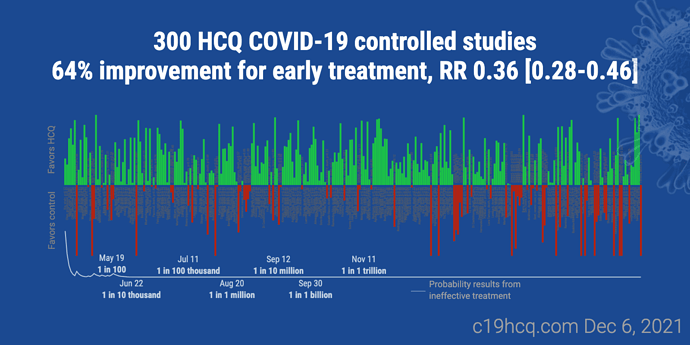 Average 64% reduction in the bad outcomes
Study list below 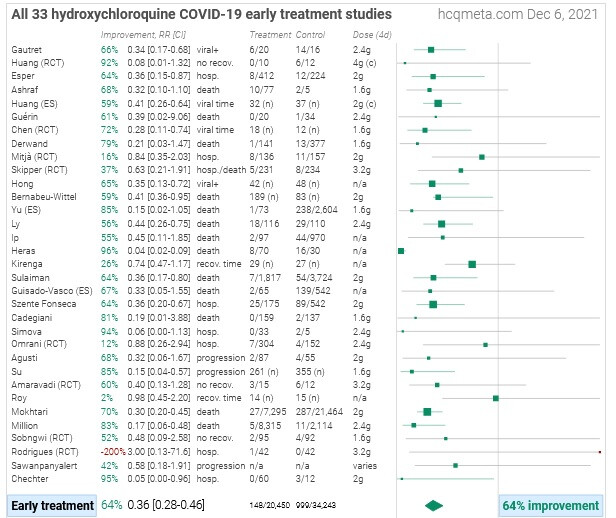 So, who are the charlatans here?

The other accusation, in my view, looks like the predictable trumped-up medical trials technicality, which plays a traditional support role in witch-hunts; the two pronged, evidence-bypassing attack on credibility.

Yes exactly, and remembering that this 64% improvement is a critical improvement as HCQ’s use is to prevent URT infection becoming LRT infection. In Raoult’s first small but well designed trial, HCQ cured/cleared the infection in 6 days in almost all the participants. Similar efficacy has been shown in its use as a prophylactic, both in studies and around the world, much like IVM.
It’s distressing that there doesn’t seem to be anyone standing up for Raoult any more, and HCQ has been more or less forgotten as the case is made for IVM. Yet the greatest medical scandals were over HCQ - the promotion of the carcinogenic Remdesevir by GILEAD/Fauci, and the fabrication of the LANCET study that had to be withdrawn but maintained its hold thanks to media silence.

Hydroxychloroquine used to be freely available in France. It was withdrawn from all pharmacy shelves in January 2020. 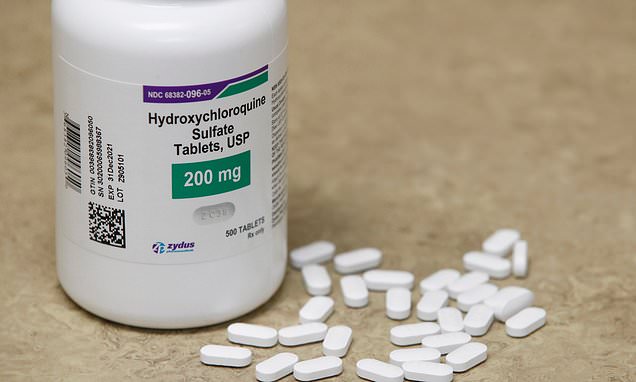 France bans hydroxychloroquine as a treatment for Covid-19 patients

France has revoked a decree allowing hydroxychloroquine to be used as a treatment for coronavirus after several large studies showed it increased death rates among patients.

Olivier Véran is still the Health Minister in France.

Yes Rob - as Pepe Escobar’s “seminal” article revealed, and without which I might have taken much longer to find out about what happened. That move by Agnes Buzyn was an absolute giveaway, showing that they knew both that “a pandemic” was coming, and that HCQ was an effective treatment for it that would take the sting out of the Virus and take away the impetus to vaccinate.

Raoult made early representations, in March I think immediately after his trials, to free supplies of HCQ for doctors and outpatients, but the Health ministry only agreed to its supply in hospitals for treatment of seriously ill patients, against which it was useless. As he said at the time - “this will allow them to demonstrate that it doesn’t work.” But it was Raoult’s later accusations against the government of being responsible for many unnecessary deaths that really riled them, being true and being believed by many people. Those “claims” - which were absolutely true - were then thrashed out in a three hour session in the French senate, and remained unanswered. Well you probably know all this! I’ve spent the last year and a half trying to get people to listen to what Raoult has been saying, about the development of variants and treatments and lack of need for vaccines, and natural immunity, for the last year and a half, almost without success, even when I translate it for them…

They published the decision about Raoult today, basically it absolves him scientifically, but says he was a bad boy in how he expressed himself. It shows that they had absolutely nothing on him, because they would have loved to screw him to the wall with proven accusations. Some notes: they had to move the proceedings across France to Bordeaux because he is so popular in Marseille. Not a single patient accused him of wrongdoing!

Back in February 2020 I, stupidly, yes stupidly, promoted the closure of schools in France BEFORE the government actually closed them. I was watching Italy and Spain. It’s a good example how the media can create the demand that then the government can pretend they are responding to, when in fact the media and government are working together to create that demand.

In one month I understand I had been fooled. How? I was watching French news at the time (which I NEVER do now) and for weeks they TALKED ABOUT Didier Raoult but they never TALKED WITH Didier Raoult. Keep in mind that Raoult is not just any doctor/researcher, he’s the most cited French clinical researcher in his field, he’s a ‘star’ of French science. In February and March 2020 he was attacked ruthlessly and constantly in the French media. Ridiculed. Slandered. When I investigated him and asked the obvious question ‘why don’t they interview the guy?’ I realized I had been fooled. So, Didier Raoult was my ‘wake up call’ or my ‘red pill’ I guess you could say.

So, today we learn that they can’t pin anything on the guy except ‘bad manners’. That is: he fought back. Now he has 800k twitter followers. He can speak directly to the world.

Also keep in mind that Raoult criticised Gilead’s cash cow Remdesiver (highly promoted by Fauci), (and which is a ‘treatment’ and thus hydroxychloroquine and ivermectin are competitors, and cheap, and safe and effective) which causes kidney failure, which, after the EU bought a few billion euros worth, the WHO decided it was not good for Covid. I think that is the last word, not sure about that? I don’t think it has been banned. I would stay a hundred miles about from Remdesiver if I were you.

Also keep in mind that Gilead, the BigPharm owner of Remdesiver, is USA deep state, the CEO in the late 90’s was…Donald Rumsfeld! He went from that job to secretary of defense under Bush II.

here’s an article from today about Raoult, in French, 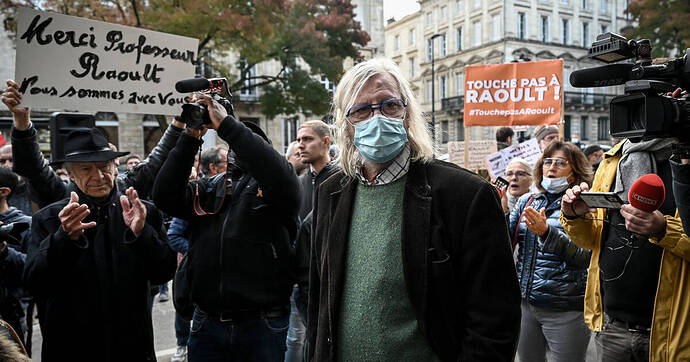 That’s great Everyman, many thanks, and particularly for the reason his court hearing was moved to Bordeaux! I’m greatly reassured to know he has so much local support - and wider of course too.
Just a word now about Remdesevir. A few weeks back following the banning of IVM here for COVID, I collected stuff to put in a submission to someone in the advisory group on medicines, which meant looking at all the details on which drugs were permitted and the basis for them and side effects etc etc. What I found was that Remdesevir was authorised for hospital patients NOT on ventilators EVEN THOUGH the WHO had withdrawn its support for the useless dangerous drug. Our TGA made some weak excuses on why it was that they still recommended it despite the WHO not doing so!
Also must say that according to Raoult, and the paper that was written about the immunocompromised patient who had four courses of Remdesevir to treat four repeat infections of CV, the Alpha (Kent) variant actually developed in this patient in Northern France and then spread across the channel in September 2020.
I believe the same thing may have happened with the Omicron in S Africa, in an HIV patient. Remdesevir is mutagenic, and in facts operates against the virus by causing adverse mutations.