The tide is turning: Fuellmich/Wodarg/Yeadon. As crucial as that Rogan/Malone vid. Don't miss. Spread around

Mike Yeadon more passionately lucid even than I’ve seen him before. Laying out conclusive evidence that the scam is an authentic crime against humanity. This stuff is getting out, and can’t be stopped. Please spread as widely as you can. That really matters: 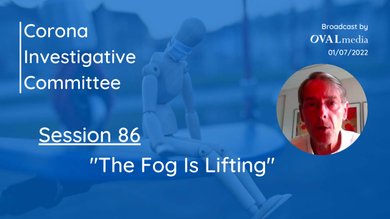 Dr. Mike Yeadon (Former vice-president of respiratory research division, Pfizer) The Corona Committee was formed by four lawyers. It is conducting an evidence review of the Corona crisis and actions....

right now. The Florida climate agrees with him.

This is a great interview of/talk by Dr Mike Yeadon, really if you watch this carefully you will have a high level ‘intellectual self defense’ concerning the covid psy op. Thanks for posting!

Dr Tom Cowan has also recently put out quite shocking information about the jabs. The following 26 minute vid is not easy to follow at the beginning. Basically Cowan compares covid jabs to flu jabs. The key here is that Cowan does not go on numbers of injections given, but rather on individual batches of jabs, and how these batches effect the recipients. Also, in the USA, killer batches have been deliberately spread across a large number of states, so as not to make it too obvious that mass murder is taking place… 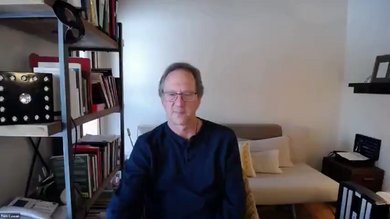 Tom Cowan presents analysis of official VAERS reported deaths and injuries. This is edited from his original longer talk, here: https://www.bitchute.com/video/m5m2HO2VVOTj/ He gives credit to the auth...

I should also add that Mike Yeadon worked at both Porton Down and Fort Derrick. The people who work in places like this are total psychos; no excuses.

I would venture that the reason that Yeadon is now so outspoken is because he wants to avoid the gallows (you can hear the desperation in his voice).

Bur hats off to Mike Yeadon, for having the courage to speak out.

Rob, never, ever under-estimate the power of double-thinking self-delusion, especially amongst the natural goodthinkers.

If you’re brought up in modern Western child-indoctrination; if you happen to have that special combination of being a nerdy, swotty goodthinker, and you’re also incubating an ambition-entranced hunger for what Freddie Raphael called “The Glittering Prizes” (TV series) that are on offer to any ‘good’ child - even from the most modest proley background - who keeps his/her nose clean and works away diligently to mug-up all the orthodox, official ‘truths’; and who then begins regurgitating these as a ‘professional expert’ as soon as the necessary grammar/public-school/uni hoops have been leapt through… Well then, if you behave like that, you’re set for life on the exceedingly lucrative and high-esteem path that’s dangled before you to get you to become one of the necessary goodthinker field-hands for the gangsters-in-charge: the bourgeois managerial-class of technocrats, who’ve swallowed absolutely that alluring delusion and simply can’t conceive that the whole intellectual foundation of their faith is laid on sand.

And - of course - “It’s difficult to get a man to see something when his income [and status and power] depend on him not seeing it.”

I think that what we’re seeing in Mike Yeadon is a man who’s lived that belief system in good faith for sixty years (carefully not seeing the legion of holes in the official doctrines), who has been thrust this past twenty months into a state of utter, existential shock, as he’s been forced slowly to peel away, a layer at a time (and still counting), all the unexamined ‘truths’ by which he’s lived his career; and done rather well, conventionally speaking.

If I were a convenor of one of many peoples’ revolutionary tribunals set up to process all the multitude of technocrats, pols, mediawhores and tenuredivories who’s names were before us for subjection to revolutionary justice, I’d be tempted to say: “Yes, definitely an apparatchik - probably a naive one - of the dire system which we’re now putting on trial; but he did damn good work on shouting the alarm, once the grotesque crimes of the covid scam, unmistakable to any mind that retained any shred of intellectual honesty, forced the scales to fall from his eyes. Summary judgement: allow some mitgating circumstances to him…”

There are lots of people of varying degrees of guilt who, both by acts of commission and of omission, have assisted the great crime against humanity which was the covid scam. In my reckoning, all of them, by the thousand, should be hauled up before such tribunals to stand trial. But even for the grossest criminals amongst them - people such as Fauci, Gates, Schwab, and the more shadowy hyper-rich lurkers in the .001-percent shadows for whom these infamously-known faces are little more than gophers - even for these, when their crimes have been thoroughly exposed and have earned them a ‘guilty’ verdict, I personally would always argue for civilised, merciful sentences: Substantial community-service orders for the still-able bodied; complete expropriation of wealth, right down to a modest, common-citizen level; and till-death surveillance and restraint regimes for all of them, the able bodied and the aged infirm.

I too feel the temptation for extravagant vengeance to be taken, being as barbarously human as anyone else. But I can’t endorse it, because I’m deeply persuaded, after a lifetime of searching and musing, that that’s not why we’re here; not why we incarnate life after life. We’re actually here with an innate mission: to do what good we can, and to grow towards love, because that service is needed permanently, to help keep existent reality on its track of evolution towards ever more beauty and evolved, complex wonders, and to help sustain it by our efforts from following its innate tendency to fall back into universal high-entropy; chaotic universal white noise; what Blake called “…the howling storm…” Indulging vengeance doesn’t fit with that ancient noble mission. Works in favour of the entropy, in fact.

For all those, the people who need to be indicted and tried, who have used the innate right of free will which is part of this whole serial-incarnation deal to commit the entropy-encouraging wickednesses that they have, mild, merciful justice is right: “There but for the grace of fate, go I…”

Rhis, I agree with just about everything you say; which is a bitch, because I like a rigorous debate.

There was another doctor recently, an Asian gentleman, who did a really good explanation of what’s happening with the vaccines. It’s quite complicated stuff to get across to the public, but this guy managed to do it very succinctly in under 15 minutes. Unfortunately I didn’t bookmark the clip and can now no longer find it.

The psychos are backpeddling. I would venture that this is mostly because of what’s gone on in Kazakhstan and Bulgaria, where protests turned incredibly violent and took the government out.

It’s the same worldwide. People have had enough of this ersatz shite. If it really kicks-off in western Europe it will probably be in France. 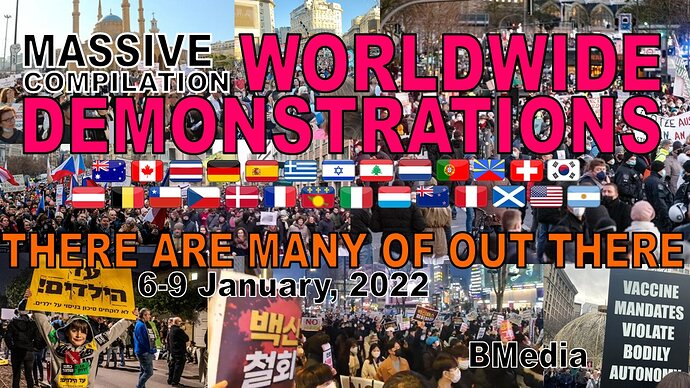 Compilation Worldwide Demonstrations - There are many of us out there [Jan 9,...

This year, 2022, will be a very challenging year for humanity! Worldwide more and more people stand up for their rights, their freedom and fight together against the globalists agenda. In this compila

The dissenters might be a minority, but there are millions and millions of us. They cannot roll-out the global police state if we do not comply.

We are on the front line, and we need to hold it for a little bit longer.

I’m torn by this, Rhis is correct of course. But maybe a true bodhisattva would spare these evil people the full consequences of karma by ending them promptly? As happened with Langdharma (I’ve forgotten the assassin’s name).

Thanks for posting Rhis.

Thanks for posting Rhis.