The political establishment is now going after Dr Peter McCullough 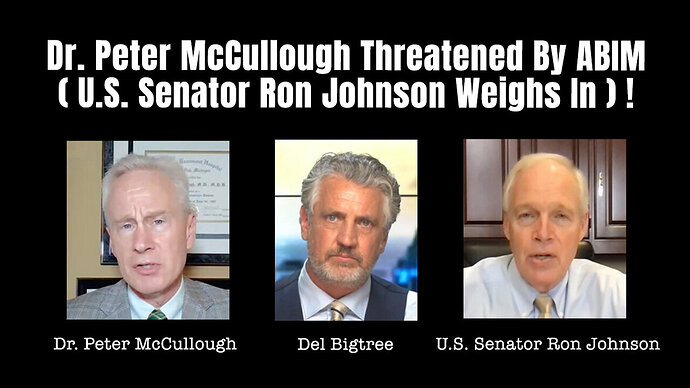 Del Bigtree of The Highwire interviews Dr. Peter McCullough and U.S. Senator Ron Johnson about the threatening letter Dr. McCullough received from the American Board of Internal Medicine (ABIM). Origi

Ominously this is a political fight, with battle lines shaped to a significant extent by the advocacy (R) or suppression (D) of hydroxychlorquine in the Trump era, and then ivermectin and the polarisation from the vaccine rollouts and mandates.

At stake may be nothing less than the future of medicine, in the west at least, and (in time ) beyond. This is no ordinary scientific dispute, for McCullough is one of a long line of doctors sanctioned by the medical authorities for doing what is absolutely their duty to patients - to treat them, and give them their clinical view.

The establishment has power on its side, but not science. I’m not aware of any situation where a doctor was sanctioned and their clinical covid-19 viewpoint subjected to evidential scrutiny and scientific evaluation. Almost invariably, it centres round hastily-written clauses about so-called “professional” or even “ethical” obligations not to deviate from “scientific consensus”, and cynical clauses relating to ‘misinformation’ or ‘disinformation’; cynical for sure, because there is never any intent to challenge anything resembling evidence against the prevailing consensus - a consensus that is only maintained by bullying and threats.

They won’t necessarily win. McCullough, a key figure in raising awareness of early treatment for covid, is a hero to many people, but should also be able to command a lot of broad support. He is a leading expert in heart and kidney medicine, and indeed covid itself, going by publications and citations. He may be able to collate massive public support, which could make the move backfire by raising the public’s awareness for them.

Senator Ron Johnson has been an energetic supporter of those challenging the covid narrative. He immediately wrote to the persecuting body (ABIM) calling for open debate.

Sen. Johnson Calls on American Board of Internal Medicine to Participate in...

While some might prefer open denunciation of this nakedly political witch hunt, this could be quite a shrewd political move on Johnson’s part, which leaves the way open for Dems to support the call for debate ‘in the interests of public health and science’, without admitting to any past misalignments.
The louder is the call for public debate the more the issue of censorship (and of course the medical issues of which McCullough speaks) the greater will be the pressure to back down before any more damage is done. However in my view to make the crucial difference, the noise level will need to reach a much higher level than it has so far. Presumably the establishment, riddled as it is with vested interests and now guilt, has made its calculation.

Steve Kirsh has also challenged them

I just challenged ABIM to a debate

They are trying to take away Dr. Peter McCullough's medical license for speaking out against the vaccines. So I sent them an email challenging them to defend their position.

Currently, there seems to be a worldwide, or rather western-wide phenomenon where medical hierarchies are transparently unable to debate covid-19 on any level, even with lay people - and rely totally on the media not to challenge them on any material issues. Journalists line up to ask searching questions like, Why can’t the vaccine be rolled out faster, or Why can’t you remove the medical licenses of doctors ‘spreading misinformation’ even faster.

Going after the likes of McCullough - the heaviest of medical heavyweights - is a breathtaking move, partly reflecting how deep they are in it already. Politicially (from a cynical point of view) they probably had no choice, as he was spreading too much true information.