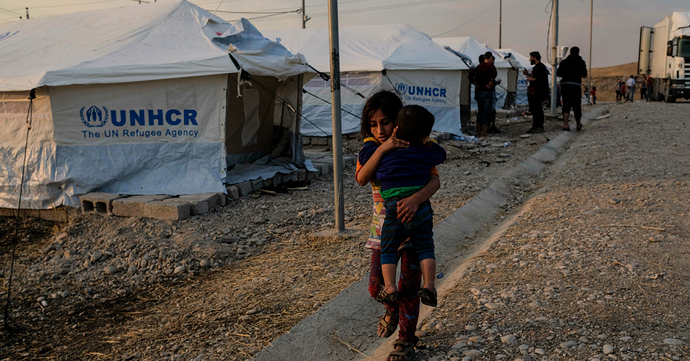 'Horrifically Catastrophic': Report Finds So-Called US War on Terror Has...

"We need a reckoning. We can't simply move on."

Beyond Numbers: The Human Impacts of Displacement

Numbers only can tell us so much. Numbers quickly can become numbing. Especially when numbers are so large, when displacement reaches the millions, it is easy to forget what the numbers represent. One can lose any sense of how it would feel to flee for one’s life, to lose one’s home, to have one’s connection to a place torn asunder, to have one’s community shattered. One easily can forget that the numbers reflect individual people with individual names and lives that have been damaged forever.

Most people (ourselves included) have great difficulty comprehending the scale of numbers like 37 million displaced. Most people (ourselves included) have great difficulty comprehending the meaning and effects of displacement for those displaced. Grappling with the human significance of displacement on this scale requires, we believe, conscious effort and attention to the individual lives involved. Yemeni Sala Khaled describes her experience of becoming “an ‘internally displaced person’… a statistic.” In recounting how she and her family fled their home fearing for their lives, Khaled reminds readers how much statistics obscure about the unique experience of each displaced person: “Conditions vary as much as individual stories do.”

While there is no adequate way to convey the immensity of displacement’s damage, understanding the damage in qualitative and personal terms remains important work. In Yemen, for example, hundreds of thousands of IDPs, like Sala Khaled, live in one of hundreds of informal “sites” across the country. The sites include public infrastructure, unfinished buildings under construction, and spontaneously constructed informal settlements where “services are often limited, and residents face significant protection risks, including exploitation, harassment and gender-based violence,” according to the UN. Most of these locations lack any formal management or access to health services. In many of the sites, people lack reliable water supplies and toilet access. IDPs report “feeling unsafe, [a] lack of privacy, limited representation of their needs, limited freedom of movement and harassment from other IDPs or the host community.”

The displacement caused by the U.S. post-9/11 wars has torn apart neighborhoods, communities, and entire societies alongside other forms of wartime violence. In Iraq, for example, sectarian fighting and displacement following the 2003 U.S.-led invasion destroyed what had been a “mosaic patchwork” of mixed communities in which Shia and Sunni and other religious and ethnic groups lived side-by-side, working together and intermarrying. What replaced it was an Iraq divided into three large ethno-sectarian regions defined by increasingly homogenous Shia, Sunni, and Kurdish identities. In cities like Baghdad, U.S. forces contributed to the hardening of ethno-sectarian divisions when, as security measures, they walled off what had become largely single sect neighborhoods due to wartime displacement. Several small minority communities like the Sabean-Mandeans and the Shabak almost completely disappeared from Iraq through displacement and violence. The newly entrenched divisions are so profound they may never be reversed.

The effects of displacement extend to host communities and countries. The work of housing and hosting refugees and IDPs over extended periods can be a significant burden to host families and communities, many of which are often on the margins of poverty already. The example of Yemen again shows that around half a million IDPs only had some form of housing thanks to host families and communities, including in makeshift settlements. The arrival of refugees and IDPs can trigger grievances, inflame pre-existing xenophobia, and spur competition for resources, among many other sociocultural, economic, and political effects.

Host societies also experience beneficial effects such as greater societal diversity, increased economic activity and vitality in some cases, and direct financial assistance from international organizations and foreign governments. Documenting the full societal impacts of displacement—as well as the impacts at individual and intermediate levels—in the countries discussed here is beyond the scope of this paper but remains vital work for scholars, journalists, and affected peoples themselves.

Neither qualitative nor quantitative methods can adequately measure or convey the effects of wartime displacement. Still, it is important to attempt to quantify how many people have been displaced as one dimension of the damage brought about by the United States’ post-9/11 wars. Displacement caused by these wars indeed has intersected with and exacerbated other forms of damage. In addition to displacing at least 37 million, the wars have killed and injured millions and torn apart neighborhoods, communities, and entire societies, impoverishing people in economic and other ways. An estimated 770,000 to 801,000 civilians and combatants, on all sides, have died in just Afghanistan, Iraq, Syria, Pakistan, and Yemen since U.S. forces began fighting in those countries. That is only the number of combatants and civilians who have died in combat. Many more have died as a result of disease, hunger, and malnutrition caused by the wars and the destruction of health care systems, employment, sanitation, and other local infrastructures. While these “indirect deaths” are still being calculated by researchers, the total may exceed 3.1 million. The total number injured and traumatized surely extends into the tens of millions.

The displacement documented in this paper, along with the wars’ death toll and other intersecting forms of harm, cannot simply be dismissed or normalized as “unintended consequences” or “collateral damage.” The displacement and other suffering must be central to any analysis of the post-9/11 wars and to any conceivable consideration of the future use of military force by the United States or any other country. The legitimacy and efficacy of war should be questioned more than ever given nearly two decades of disastrous outcomes. One must also ask what steps the U.S. government, U.S. citizens, and other responsible parties have taken—and what steps they will take—to repair and make amends for the damage inflicted on the 37 million or more people displaced by the post-9/11 wars.