"The tactics used to try and force me to stay were sadistic to say the least, I feel very very lucky to have gotten out."

Remember when Michael Corleone is in the hospital with his father, and he says to another man who’s come to visit the don: “Men are coming here to kill my father…”

He organises for himself and the other visitor to stand at the entrance to the hospital with their hands thrust into their coats - apparently holding guns ready to draw. The assassins’ car pulls up; they clock the situation, and drive off again.

I’d say John O’ Looney has just had a similar lucky rescue by a comparable bunch of vigilantes.

Recall too the current joke: “What’s the difference between a cospithirry and an agreed, established fact? About six months.”

The idea that hospital personnel would collude in the attempted murder of their patients is well on the way to that second status, I’d say. This smells like a definite plot to kill John, when his enemies heard that he was hospitalised. Would any ‘solid, commonsensical person’ have credited such a ‘crazy’ idea six months ago? And now?

It might be poor but Remdesivir is a treatment. Trying to push it onto him by medical threats or lies is bad. But what’s the proof of anything sinister? Presumably most of the staff believe it’s the right thing when they give it.
I’d wait for more details before using the M-word on treating doctors. It could be that they behaved badly - possibly the usual - and John didn’t want their treatment. It might not be that surprising there was a bit of a battle over that, we’ve seen the same thing in the US over Ivermectin, but it wasn’t because they were trying to kill the patient, rather that the Docs in charge were following policy, probably ignorantly.

There’s more info to come out about how he went in and what happened then. I’d imagine if he was in a bad way when he went in he might have wanted Ivermectin. Did they try to use Midozolam on him?

This one seems a bit dodgy to me. Particularly that the psychos have recently launched a media propaganda campaign against John O’Looney.

John O’Looney knew that they would try to take him out.

Maybe you could ring John and ask him what’s happening…

The guy giving the interview to the Rair Foundation (go look them up) is sweating quite heavily; always a dead give-away. They also got John O’Looneys name wrong; another dead give-away.

Just my take on it.

If you really believe Remdesivir is “a treatment”, I suggest you listen to Dr Bryan Ardis talking about the Remdesivir trials. Gilead (the patent holder) own trials were halted as 23% of the only 681 people on the trial died. Remdesivir “proven to be effective against Ebola” was pulled from the 4 drug Ebola trials as it was the least effective and clearly the most dangerous. 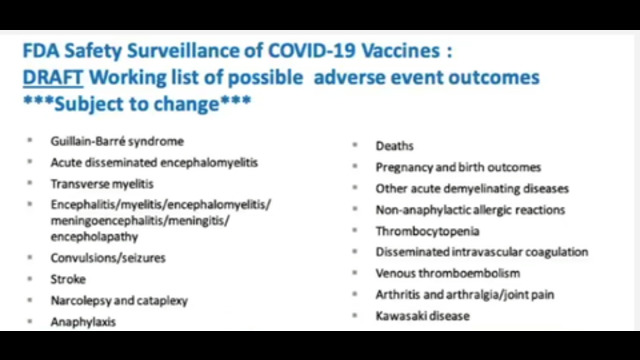 DR BRYAN ARDIS WITH THE MOST STUNNING TRUTH ABOUT COVID FAUCI &...

> Remdesivir “proven to be effective against Ebola” was pulled from the 4 drug Ebola trials as it was the least effective and clearly the most dangerous.

IIRC in the list of the 4 drugs Remdesivir had a fatality rate of 53% and was chosen by Fauci to be issued in hospitals all over the US for treatment for Covid. IIRC that is.

It’s also being used in NHS UK hospitals including the one near me.

I do think that the Oxford Uni guy alledgedly at his bedside hassling him to sign up to new “treatments” was suspicious to say the least.

> But fundamentally for me things to change very much in the hospitals and one of the very first people to visit me bedside was a representative from Oxford University funded by the gates foundation begging me to trial new medicines (whilst being unable to look me in the eye) not even related to Covid – naturally I declined.
*> *
> I was told I would die and these medicines would be my last chance; again, I declined and stuck to my guns.
*> *
> Trust me, that’s not an easy thing to do laying there in a hospital ward on your own, unable to breathe easily, and denied any family support or visits.

I’m not sure whether this story is genuine or not. Hopefully we’ll soon hear John himself confirm or deny it.

Just to be clear I don’t think Remdesivir is a good treatment though the picture would look unclear to Drs being told to treat with it. A quick look at the (probably dodgy) research picture below.
However, my point was that regardless of merit, it IS being used as a treatment - so the fact that it is used in a particular case of a pesky activist is not evidence of anything sinister.

John O’Looney is a courageous and principled guy for sure. I’d tend to think he was telling the truth on factual matters, but he’s far from neutral - said covid didn’t exist, and was a murderous plan. So I wouldn’t rely on his interpretations without even knowing the facts.

The website c19study.com keeps track of all the covid studies of 30 or so treatments and is continuously updated. For Remdesivir (late treatment) its average is a modest 20% improvement - that’s not saving very many people 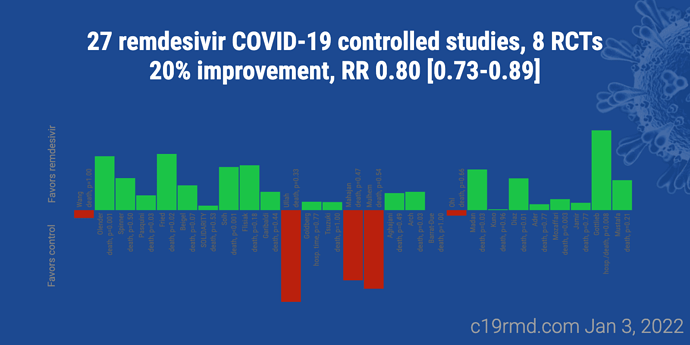 Remdesivir evidence…Preaching to the choir, but it’s worth bearing this in mind:

i.e. with $21bn at stake for Remdesivir (thousands of dollars for a course) you could expect a high fiddle factor in some of these studies.
Not to mention the side effects (highlighted in the video with Dr Dube?). So I wouldn’t be arguing for it. And almost everyone that gets Remdesivir late on should have been helped by antivirals at the early stages, but weren’t.

Yes the approval process for Remdesivir was criminal. I didn’t even see a process - it was like Fauci or the FDA just approved it. Fauci certainly approved ‘of it’, regardless of the evidence.

Update: meant to reply to you here as well, Rich:

“I do think that the Oxford Uni guy alledgedly at his bedside hassling him to sign up to new “treatments” was suspicious to say the least.”

Yes but is it sinister, or is it just run-of-the-mill appalling?
Cheers

Yes I thought it was odd too, the American spokesperson in particular.

As for the scene from Coppola, great example @Rhis, I guess we remember who turned up soon afterward, the paid-off cop, to clear the way for the assassins. But buying a little time had already saved Vito.

The man who helped Michael, i forget the name, had previously been assisted to remain in America as a favour granted by the Don at his daughter’s wedding. The Godfather films, even the fumbled part three, are a very faithful reflection of modern societies as pyramids, with the Gangsters In Charge at the apex. But I don’t mean Don Vito, who practised Mutual Aid, rather the cops, the councilmen, the scum swept out of Cuba, etc, and ultimately Michael too.

Polite softly spoken folks with white collars are the ones getting off on the war against Virus. They’re the second layer, the Gangsters Fanbois