Always worth a read imo, RF illustrates the power of balanced reporting. 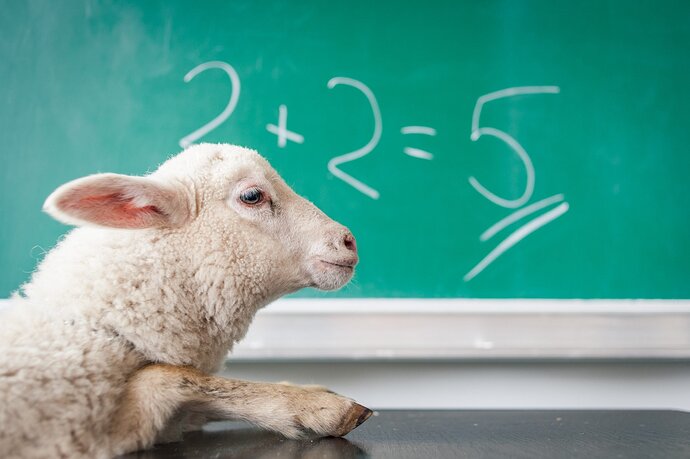 Three Tips for Checking Whether A Medical Study is Legit or Bulls-it -...

Simple and easy tools to use to check whether a paper is solid or shaky.

I think I mentioned this before in a post some months ago but the technique of skimming extracts using online tools, not least Google Scholar, is taught on some postgraduate courses. I doubt the undergraduate courses even bother with that, some of the time.

As a way of isolating the wheat from the chaff and finding a shortlist of articles it has some merits, but at some point you have to actually read the articles and make some sense of them. If they turn out to be bullshit, start again.

That this is not always taken seriously became obvious when I gave a dissertation poster presentation and was taken to task by an Emeritus Professor for including “so many books” in the references. Like some reading books type of weirdo. The implication was that quick and dirty is good enough because the person assessing your work ain’t gonna know any better.

Hi again CJ,
It’s a good question being addressed - how can someone not qualified infer, weakness, error, misleadingness or deception in a study?
I think it depends on the level of familiarity with the research. Without familiarity you’re restricted to spotting basic errors, or ‘deliberate mistakes’.

But even in the cartoon version of the propaganda war it’s supposed to be excitable anti-vaxxer tinfoilhatters that make unsubstantiable claims - not researchers. The reason for opposition amongst unqualified people is the demonstrable deception and spin in supposedly ‘more scientific’ research that supports the establishment view. Often it ‘supports’ the establishment view for reasons that are not rounded in science.

I can’t think of many such instances where research that supports an anti-establishment view can be effectively dismissed by single factors. This is partly as there is no vast pool of funding and influence to fund, support and coset establishment-unfriendly conclusions. Even good researchers are put under pressure and there is no anti-vax industry behind the scenes to prop them up.

Not so on the other side. When the outcome is politically important, the likelihood of bias makes it worthwhile to check the basics for those deliberate errors, for you can be assured that most commentary will turn a blind eye to them.

For example, most of the studies ‘finding’ that hydroxychloroquine was useless for covid-19 deliberately avoided the one scenario where it had been shown to work very well - early treatment. To glean that from those negative studies (and the propaganda surrounding them in the media and the science media), you would probably have to know that - although the fact that these studies came mostly from the US and the UK, the leaders in the vaccine stakes, might have suggested further rooting around.

But having said that, I can’t see how any of the three ‘tips’ are valid either generally, or when applied to the research paper discussed (the paper by Lei).

In Tip One (Is key information left out or hidden?), I don’t see the ‘whopper of a red flag’, or any red flag. The outcome of statistical analysis is often all you can see and you can apparently get the data which is far from guaranteed normally.

" Not unless you want to: email the study’s corresponding author asking for the missing data/material, receive the material, analyze it and determine whether it holds water. And the very fact that one has to do all that is enough to conclude there’s something very suspicious going on."

Wholly unjustified in my view. There is no reason to accuse the authors of ‘burying’ anything.

Here’s Tip Two: If the source material is a study about the effect of an intervention, does the study measure serious illness or death in humans, or is it on animals or theoretical, test-tube models?

I think Frei then changes the subject from the study to the use that others made of it:

"We’re constantly being told that a particular ‘treatment,’ ‘vaccine’ or ‘public-health measure’ is saving lives. And that a ‘new variant’ or ‘viral-escape mutation’ is very deadly.

But such claims are meaningless unless they are objectively, verifiably, shown to be true.

So for starters, they’ve got to be studied in people. Not in mice or monkeys, nor in test tubes or petri dishes (AKA ‘in vitro’)."

She seems to be applying criticism of vaccine safety or efficacy trials.

“So this is very far removed from meaningful studies involving humans.”

I think she takes her eye off the ‘research question’ here. It’s not one of these dramatic Is-It-Safe-Or-Not studies but a mechanistic paper to throw light on an existing disease that is known to be often fatal once it reaches the hospital stage.

Incidentally she also forgets to check ‘the answer’ as the final line of the study assures the public and the medical fraternity that it’s just as well we have vaccines to remove this pesky spike protein.
So if the study has been ‘weaponised’ it’s unlikely because it was biased against the covid-narrative - any problem would stem from the weaponizers though I definitely think it right that concerns were voiced.

In the third Tip she does point out something useful regarding the America’s Frontline Doctors claims that the vaccine itself can spread. That’s not wild in itself - the Pfizer document does discuss transmission in this manner (if I’ve read that bit correctly). But AFD seem to lay the blame for all the immune reactions, Bells Palsy etc on spike protein shedding from one person to another. But these reactions have mostly been reported for the people vaccinated. There could conceivably be some reports of vaccine jumping but if they want you to believe it’s happening in vast numbers a link is essential - and AFD link quite misleadingly to a paper about shedding covid.

This isn’t good from AFD and that criticism is useful - but it doesn’t reflect on the paper itself; hence isn’t much of a tip for evaluating research papers.
She also didn’t look around for other support for the theory expressed in the paper. This was actually discussed here

Like Rob I’m not sure what to make of it either. Here’s a response from an always-disrespectful pro-vaccination batter It seems the authors of the study say it doesn’t mean vaccines are dangerous (in link above). Mr Insolent Disrespectful points out (i) the dose of ‘spike proteins’ achieved by the vaccines (was it something times 10^7?) is way lower than what was supplied in this experiment (something times 10^8), and (ii) if it was going to be as dangerous as some suggest we would have seen…

where there are two related (I think) papers.
I also think it relevant that the blogger I refer to in that post as Mr Insolent Disrespectful (who clearly has technical knowledge and experience) didn’t find any concrete criticism of the Lei paper itself - while posturing that he was attacking it!

Quote from btl poster ‘Maxwell’ under the article ‘Covid ‘Vaccines’: A Faltering Framework’ by Dr. Sadaf Gilani (in Canada), published today at Off-G:

This is gross/criminal negligence by our governments and government agencies on an unprecedented and extraordinary scale. Governments serve solely as an arm of corporate power. Children are merely sacrificial lambs of capital and biotech experimentation.

If you’re defending COVID-19 “vaccines” your whole argument is built on trusting psychopaths.

The four major companies who are making these covid vaccines are/have either:

Getting jabbed with with an experimental poison concoction, is the OPPOSITE of “getting back to normal”. It is, in fact, the beginning of living in an insane medical tyranny.

Anyone who still thinks any of this is motivated by a concern for our health or has anything much to do with science is beyond hope.

Anyone out there who thinks medicine, science, public health, politics, human rights, wealth, power justice and corruption are NOT now insidiously intertwined, is not seeing reality.

My immediate response on reading Rosemary’s piece is along these lines too. There’s something to be said for detailed inspection of the minutiae of scientific - or ‘claimed to be scientific’ papers. But it’s also a way of running counter-arguments - and counter arguers - into the sand. Whilst we-all are busy with our noses in the tables of results, calculators in hand, the essentially-political racketeering band waggon rolls on, driving its stampeding sheep before it.

This covid lunacy has now become something resembling a war, where the key thing is to overthrow the enemy, rather than lose oneself in detailed, nitty-gritty logical argument. That doesn’t win wars. What does is the sort of growing-in-size Summertime popular demos, which convey into the awareness of the gics and their tabaquis pushing this current crime against humanity a distinct whiff of a repeat of the anti-poll-tax riots which sank that racket - and Thatcher eventually - building up right now in places like USuk.

Like the gics and their bought-technocrats pushing the racket do, what opponents need to be doing is just settling on a handful of established facts, such as ‘The poison-stabs are summed up in three words: unnecessary, ineffectual, and DANGEROUS! Already killing and maiming thousands!’ and ‘The PCR ‘test’ is a swindle! It was never intended for infection-testing purposes by its creator, and it offers ZERO reliability in its results!’

I suggest that these ideas are already established as fact (as far as anything at all ever can be) and that therefore we-all should be blazing them out against the criminals and their racket - using such bluntly-descriptive, honest, very easy to understand words - at full bore, non-stop, until the racketeers are defeated, and Nurnberg 2 is well in hand.

When you sense that the other side in a battle is beginning to falter and break, you don’t at that pivotal moment suddenly stop your assault and start discussing arcane concerns about the art of war. That’s an occupation for peace time. Instead, you lay on your attack with increased vigour, and scream for all your troops to follow you in the last big victory-delivering push.

These are exactly the practical tactics that the enemy uses. So should we.

PS: I think also that maybe another battle-cry should be added to those suggested above: ‘There is NO pandemic! There has been a somewhat worse than usual novel seasonal flu, which has killed a slightly higher than usual number of victims. Nothing more than that.’ 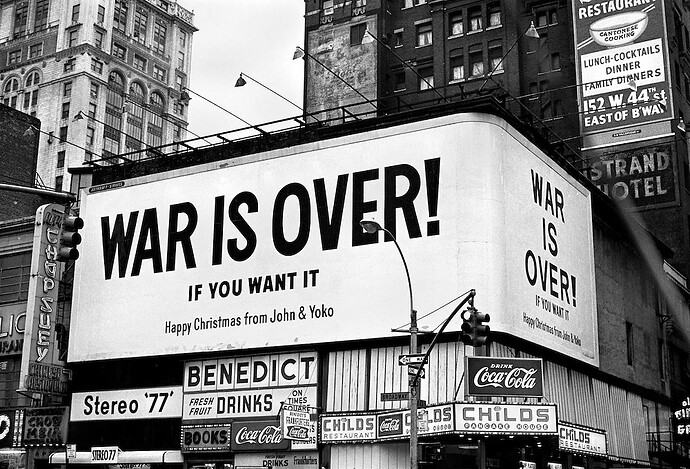 translated by Offguardian to : 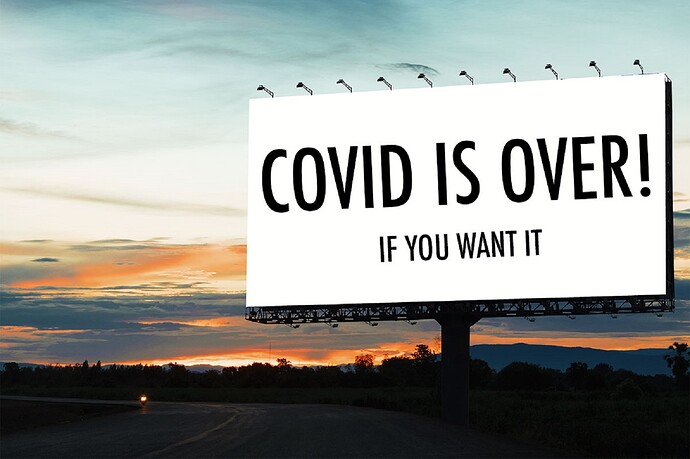 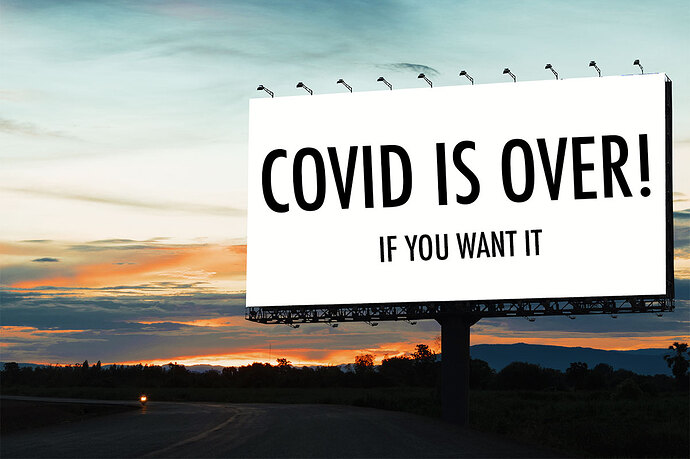 COVID is over…if you want it

Margaret Anna Alice As nightfall does not come all at once, neither does oppression. In both instances, there is a twilight. And it is in such twilight that we all must be aware of change in the ai…