Paul Kingsnorth: why I changed sides in the vaccine wars 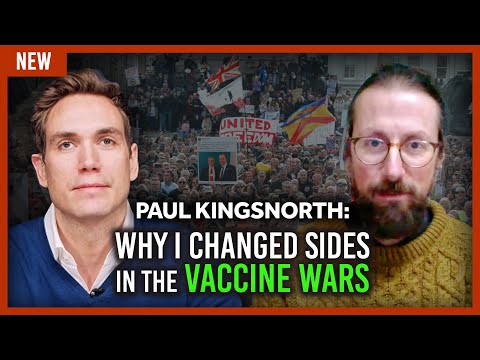 That was great, I am so happy to see PK raising his head above the parapet (his own phrase) as he is someone whose ideas have meant a lot to me - and still do…

I’d take issue with the characterisation by Freddie Sayers of the pro-vax/thesis camp as larger than the antithesis camp (which I’m firmly in, no need to add). There’s a lot of in-between-y folk who have done what they’re told, but are probably vacillating now. Paul says he’s one of them. If he can cross over so can many many others. I’d like to think that they will, and already are.

He makes a minor misstep, I think, in suggesting that lockdowns were not divisive (“we were all doing it for the greater good” - loose paraphrase). For a lot of working class people, not least people working in health/care, but couriers, till operators, tradesmen… millions of people… the impact was different. Soft-bellied admin/professional folk - not least myself - had a very different experience.

PK also mentions the “clap for the NHS” ritual as a way of creating social solidarity. I’d have to differ. For me this was one of my three key teachers i.e. why I decided the “pandemic” was madly exaggerated. (Not non-existent.)

The bizarre behaviour of people crossing the road (or walking down the middle of it) was one. The ludicrous closure of footpaths in some local parts was another, with laminated signs saying not to use the gate or the stile because coronavirus can live on surfaces for three days. And then the f__g clapping… Most of all, of course, the vast majority of people who were fronting the narrative were/are squirmy sociopaths, so there’s that too.

One of the YouTube comments puts it very neatly:

there’s only one side of this debate that is trying to censor the other side. Why would you trust the side that is censoring people?

Thanks. A good video to send to anyone (especially on the left) who is getting a bit uneasy about where this is all going. I agree with KE about the missteps.

Another one was where the interviewer suggests those in the thesis (i.e. the mainstream) camp are “rational and scientific” with which Paul seems to agree. Ha! For me it doesn’t look like that at all as many measures were (indeed are, and increasingly so) completely ludicrous and irrational. Countries with 80, 90 or 100% “vaccination” rates are having (so we’re told) huge increases in covid cases, so … we mandate those same “vaccines”? Yeah, that’s going to work. Pretend rationality and scientific thinking more like.

Touché @Willem, yes, that was another.

I do see some of the tendency Paul refers to, and I’d be hesitant to describe it more assertively than that, for “spiritually-leaning” folks to question the (currently dominant) noisier narrative. Not anti-science but anti-scientism. Or maybe even better to say anti-science-as-a-thing (and idol to be worshipped).

Yes, anti-scientism perhaps. Definitely the mainstream has a strong belief in technology to solve the world’s problems, even to the point where it’s clear (to a rational person) it doesn’t actually work. Probably due to them idolizing science.

Yet another tip of the hat to Ian M at The Lifeboat News:

The Lifeboat News: Re: Paul Kingsnorth 'draws a line' over mandates

The Vaccine Moment, part one

On the days of revelation

( I haven’t actually read it yet. It’s the middle of the night, for goodness’s sake! [“Goodness’s”? That may be correct, but it looks wrong, or at least pedantic …Zzzz…])

The troobleevers in the scamdemic may well be ‘rational and scientific’ (though apparently not as much as the sceptics, according to a rare bout of intellectual honesty amongst the fart-chuckers) but in any case, that has nothing to do with susceptibility to the hypnotic/NLP-induction techniques practiced by the skilled operators behind the current propaganda blizzard.

Each of us is as susceptible or resistant to that as fate and genetic accident has decreed. It has nothing to do with intelligence or high education. My average-IQ, basically-educated working-class neighbours are all onto the scam with much more savvy than my average uni-IQ, educated-middle-class friends; many of whom have swallowed the rather skilled, professional hypnotic programming h,l&s.

Far too much listening to the beeb and reading ‘quality’ (hah!) papers for them, to which bad influences my proletarian neighbours are barely exposed at all. Avid iphone-surfers about the charivari of the internet, though, when they can be bothered. And apt to judge commentators on their vibes as much as on their formal ‘expertise’ claims.

Liberals have had it too easy for too long resulting in shameful complacency, intellectual laziness and decadence. If they ever bothered to look outside of their own immediate and highly privileged life in any meaningful way, they would have seen the inevitable trajectory. (God-knows there were enough red flags from the off.) But, as I’ve said before, contrary to what they would tell you, it’s not about community action to protect the lives of others, it’s about community action to protect their lives.

"What it means to be ‘vaxxed’ or ‘unvaxxed’, safe or dangerous, clean or dirty, sensible or irresponsible, compliant or independent:"

To this list, Kingsnorth could add rational or irrational; i.e., in response to severity of threat, the solution offered and the possible (il)logical conclusions. The irrational have facilitated bringing us to where we are and as a consequence, my two home-birthed, prolonged breast-fed, unvaccinated, home educated, bright, kind and cheerful children face a possible future of several mandated medical poison procedures a year for the rest of their lives. Right now, I’m not particularly in the mood to listen to the fears of the theists.

I feel exactly the same about my carefully-nurtured (body and soul) grand-daughter, and her two tots. Sod any set of bastards who tries to harm - or to second-class - them. Grounds for a fight to the death against the damned manipulators, right there! Thank god plenty of people seem to be waking up into the same belligerent anger now, for how we’re being conned by damned criminals.

Yet another tip of the hat to Ian M at The Lifeboat News:

Ignored as many threads challenging the the LB status quo have been. Some over there seem to think themselves ever so reasonable because they struggle with the notion of ‘forced’ vaccination for work. Their solution? Forced testing everyday before start of shift.

… And then when both are required? Because I doubt that’s far away. Hell there might as well be a Patch Tuesday once a month, with doors locked til you’ve updated.