Mortality lowest amongst un'vaccinated', according to official government figures - The Expose

Note: if you haven’t donated to The Expose, and you don’t want to, the way to reach a clear-screen of this report is to click their ‘donate’ button, and then wade through their fundraiser pitch, to get clear access to the article at the bottom:

We finally have indisputable evidence that the Covid-19 vaccines are deadly and killing people in the thousands, and it has been quietly published by the UK Government whilst they had you distracte…

There are several things to say about this. Firstly, as we know, anything coming out of UK gov (or any other for that matter) is suspect. But the fact they have published this means it is probably worse. Perhaps putting deaths in the 14 days after jabs in the unjabbed column.

Secondly, these seem to me to be consistent with all the Canadian and US analysis done by Jessica Rose.

However even with the caveats about figures, this seems to me to be horrific, as I have almost all my surviving family double jabbed.

Good move by the Expose (though I don’t know why they chose to show only non-covid, I don’t think covid deaths would affect the picture much as they are in a minority, and why focus on May 2022 - from a quick look, the general picture has been like this since last year).
The way of categorising people according to their subsequent vaccinations seems to have confused the picture.

This is the Expose’s illustrative graph 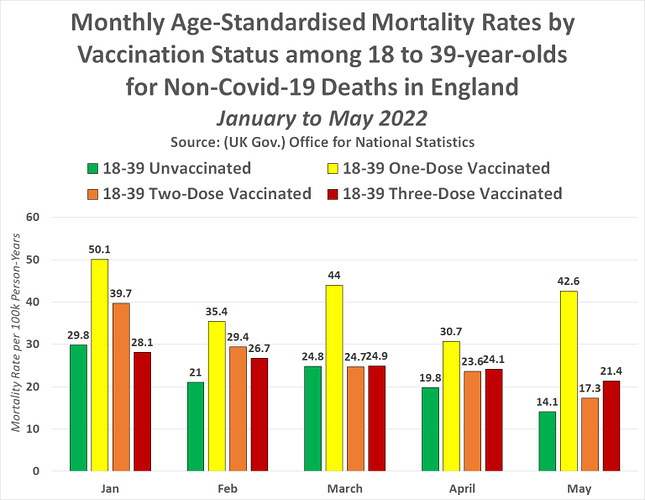 These data categories take a bit of justification. If you have only a first dose then you are one of the yellow ones (no pun intended). But that means people change categorisatons as they have each dose, and as they cross 21 day time-since-jab boundaries.

So why are these first dosers doing the worst? Well it seem to me it’s simply because this category includes all the people who happened to die (for any reason) before they could get their next dose. OTOH when they get their second dose they are removed from the category.

So the ‘first dose’ automatically show high mortality.
This transfer of deaths affects the later dose categories, which are (i) benefitting from inheriting first-dose people who have not died, but (ii) which excludes, automatically, people who didn’t have a chance to die following that later dose because they already died following their first dose.

This logic also applies to second doses. That’s likely why we see this step-down from first to second, and from second to third.

This is a great way to boost both the booster data (especially when translated into verbal summaries). Or at least it’s a good try - but even this is struggling to keep ahead of these pesky unvaxxed, who are selfishly harming the policy by not dying

The right way to vew this data is to group the ‘vaxxed’ together, weighted by the number in each group. This would reassign deaths between the vaxxed groups.
But a glance at the chart indicates that there is no way of doing that shuffling that make the deaths from the vaxxed lower than the un’vaxed’.

Regis Tremblay hosts lab. scientist Poornima Wagh: "There was no pandemic, no virus."
1 in every 73 COVID-19 Vaccinated People were Dead by May 2022 in England according to UK Government
Evvy_dense 9 August 2022 10:39 #4

Sorry I meant to reply to your post Pat but ended up just talking about the data.

It’s notable that the govt institutions publish figures that look bad at all - showing that there is still value to be found in the official data. Rather than being wholly corrupt data or system from head to toe, you have (mostly) sound people and processes in a system where political forces pushes nearer the top that which is not the cream, and which can slant the outcome.

It was a little effort to find ther commentary, and it starts off by pushing the boosters:

“Monthly age-standardised mortality rates (ASMRs) for deaths involving coronavirus (COVID-19) have been consistently lower for all months since booster introduction in September 2021 for people who had received a third dose or booster at least 21 days ago, compared with unvaccinated people and those with just a first or second dose.”

Age-standardised mortality rates for deaths involving COVID-19 by vaccination status, broken down by age group. Deaths occurring between 1 January 2021 and 31 May 2022 in England.

The ASMR is a sophisticated tool, but these categorisations appear to be altering the ingredients before the skilled master chef can cook them.
I could have got it wrong, but it seems this way the govt statisticians present the data is an impressive piece of pseudoscience.

I wonder if there were any objections raised in these stats teams as to what exactly they were being asked to count!

We have an equally perverse presentation of statistics, particularly of adverse ones, on which the latest is admission of 33 cases of myocarditis in young people at a medical centre in Victoria. These were cases that actually got detected and ended up in hospital, and though dismissed as mostly mild etc, were only treatable with high-dose ibuprofen. But in the press it was noted that there was a far greater risk of such problems from catching COVID. What it didn’t say was that a) the risk is next to zero in all groups from Omicron, and b) the risk to teenagers of any disease or hospitalisation is as good as zero from catching the virus, but significant from being vaxed. This is at a time when the boosters are really being pushed, along with every other thing, seeing the virus just melting away “sooner than expected” and causing a panic amongst the masked masses.
FWIW, I went to a Hiroshima day rally on Saturday in Melbourne, from the Anti-AUKUS group I’m part of, but they ALL had masks on! Except notably John Shipton, who came to speak, and some others from the “freedom” movement. I made the mistake of going to introduce myself to Clinton Fernandes, who was wearing a beak, and before I could say who I was he asked if I could just move a bit further away! End of that conversation. And wasn’t even wearing my ZZZZ T-shirt!
So it’s all pretty toxic here. As I write this there is a discussion on the urgency to get the Monkeypox vaccine doses into (gay) arms, of which 180,000 are ordered. Not heard of Monkeypox? Geeeezzzz!

“These were cases that actually got detected and ended up in hospital, and though dismissed as mostly mild etc, were only treatable with high-dose ibuprofen. But in the press it was noted that there was a far greater risk of such problems from catching COVID. What it didn’t say was that a) the risk is next to zero in all groups from Omicron, and b) the risk to teenagers of any disease or hospitalisation is as good as zero from catching the virus, but significant from being vaxed.”

Yes - these are key points to bear in mind (or to distract from, if you’re a mainstream journalist).

“there was a far greater risk of such problems from catching COVID.” falls apart when you factor in the chance of getting covid in the first place - eg of these 33 cases in the Victoria medical centre, only one had had covid. And as you say, we’re dealing with Omicron now, where the efficacy against infection is highly questionable.

Cheers for the rally update. Pity the networking wasn’t up to scratch.

The point with Omicron too - that not only is it reportedly “more of an upper resp tract infection” - ie like a cold - but that noone ever said the vaccine would work against it, but noone ever points out that the boosters and booster boosters are all the same shit, with less and less chance of making any difference to infection or disease, and more chance of causing it. Now they are talking about Paxlovid rebound “some people may experience a return of symptoms once they stop taking it”, while at the same time the ignorant masses are asking if the stuff can be given out by chemists so that they can get it as soon as possible post infection. I can’t get over the fact that we had TWO good antivirals two years ago, and if people had taken them then the COVID would no longer be with us. Instead we have too extremely expensive and rather ineffective drugs that everyone with the sniffles will be encouraged to take.

Agree though ignorant might be a bit harsh - ‘trusting’ in many cases.

If most countries were to hold out for an Omicron-tweaked vaccine then due to the contracts signed, they would still have to pay Pfizer for the unused ‘Wuhan’ strain ones.

Perhaps booster means share boosts, and ‘rebound’ refers to the patient having to keep coming back for more.

Now they are talking about Paxlovid rebound “some people may experience a return of symptoms once they stop taking it”,

…exactly as happened with Resident Biden. Symptoms include not being able to dress yourself, apparently.

Pat, I’m no expert on this, beyond using common sense. Dissident medical professionals, who are well qualified to know about this stuff, say the following:

There are three kinds of shots:

The psychos can’t give the death shot to everyone immediately, because then it will become too obvious what they are doing.

What I’m getting at is it’s likely that your nearest and dearest won’t have had the death shot yet. What you need to do is to gently give them information, and try to persuade them not to take any further shots. After all, even if you believe in the covid nonsense even the MSM report that the shots don’t make a blind bit of difference.

I know it’s hard to get your head around, the fact that the psychos are intent on wiping out a large percentage of the human race.

The Presstitutes are calling it SADS, amongst other things.

An interview this week by Jason Liosatos with John O’Looney.

I’m sure many here will have seen many interviews with O’Looney. I’m including this one because it does bring in new information (the interview is approx 40 minutes long): 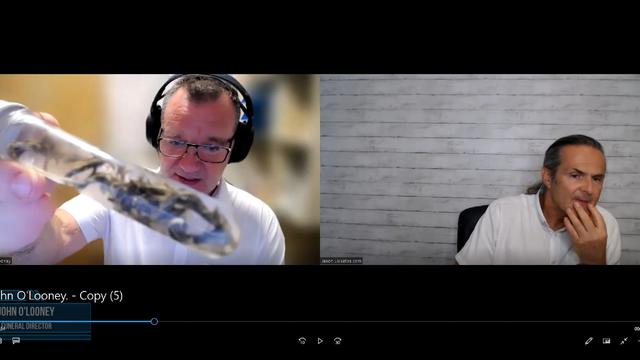 When both “lack of sleep” and “napping” could lead to a sudden and unexpected death you have to give your head a wobble and concede that we’re not in Kansas anymore. 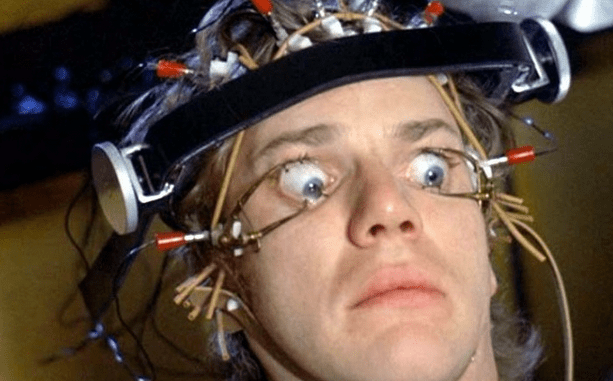