An amusing rehash of every other hysterical article du jour.

Is Omi more deadly, B asks…

So far the answer for Omicron infections seems to be no. But that does not mean that there will be less death.

Amusingly, B risks inclusion on the Index Librorum Prohibitorum with this typo:

any Convid-19 infection, even when ‘mild’, is still causing some violent symptoms and is putting the body through very high stress. Covid-19 is not a flu or a simple influenza. It is way worse. There is also long Covid which effects some 10% of all who had a Covid infection. It still causes serious symptoms up to a year after the infection and we have no therapy against it. [] My advice to everyone is therefore to avoid an infection as much as possible. Mask up whenever you enter public transport or a building other than your home. Avoid being in crowds. Always seek good ventilation.

You just have to mark b down as one of several otherwise savvy commentators who - surprisingly - have fallen h,l&s for the swindle, and simply ignore them when they bloviate about it. They’re busy windily regurging the official bs with uncharacteristic uncriticality, tinged with barely-suppressed hysterical alarm. Fear-porn, once bought into, stampedes the steadiest of us.

It’s afflicted both bMoA and Andrei at Saker. And - surprise! - they’ve both gone into censorship mode on the subject, following the mass-hypnosis programming, and refusing to allow any counter-speech on their sites, no matter how soundly realism-based. Count them as two of the otherwise-perceptive commentators who’ve been inducted into the cult. Fallibility, thy name is hom-sap.

It’s crazy, especially on the left.

Here’s my mate Markus - super lefty, expelled from Labour post Corbyn and someone I would previously have agreed with on pretty much any issue and probably still do - essentially calling the fucking cops on people not wearing masks in Luton Airport Terminal 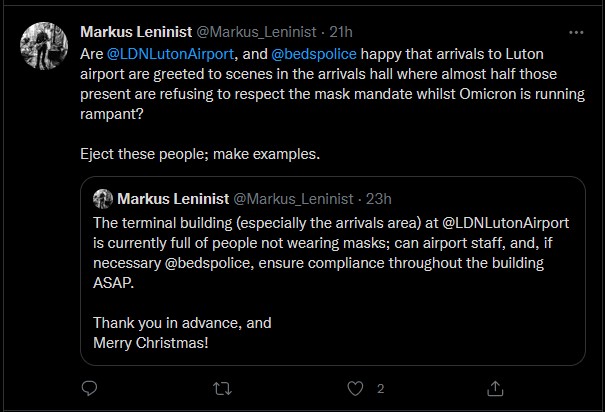