Don’t think I’ve ever seen the two Greeks so clearly flummoxed. The entire Anglozionist empire coterie of nations - USAmerica and ‘allies’ (read disposable vassals, like Germany) - seems to be in an accelerating nose-dive.

Truss and Kwarteng seem to be proving disastrously incompetent - over and above the usual hopeless level of Brit politicians lately - and are looking as if they could end up being an astonishing nine-days-wonder, before crashing out of office (even ex-Labour, with Dobbin and his collection of airhead, uber-forgettable bourgeois technocrats in charge, is running an unprecedented 33% ahead of the tories in the polls!) Will it really be this chaotic? Difficult to believe. But when you look at the universal tally of haemorrhaging shot-feet in the West, who knows? HowTF did we over-comfy, shiftless members of the Pampered Twenty Percent let things come to this!

Highly-relevant side-note: When my wonder-taters finally decide that they’ve done enough growing for this year (still at it, from a March planting time) I’ll post my delayed precis account - with pics. - of the super easy, low-labour way to grow spuds in untilled turf, on any bit of ignored ground where you can get away with guerrilla gardening.

Think I’m being melodramatic? I surely hope so; but the vibes are getting very bad…

PS: Just as the Russians are getting their - famously slow to start, but absolutely crushing once rolling - war-machine into serious action, the idiots supposedly governing the NATOstan states - including the US - are busy wrecking the economic base of the alliance, just when it needs to be churning into overdrive to have any hope of facing down the Russian challenge. And the pillocks have already sent their previous stocks of mil-materiel to the Ukraine, to be kindly destroyed by the Russian artillery storm. If I were pitching this as a film idea, the money-men would all be shaking their heads at the sheer unbelievability of the plot! Yet this is current real life we’re talking about here:

Rhis, it’s not looking good for people in the West.

I hope you’ll be able to get through it. I’m sure a canal boat, however tough it gets, will be a good way of surviving.

Amazing, isn’t it, we’re supposed to be one of the richest areas of the world.

That is, before they stole all the money. 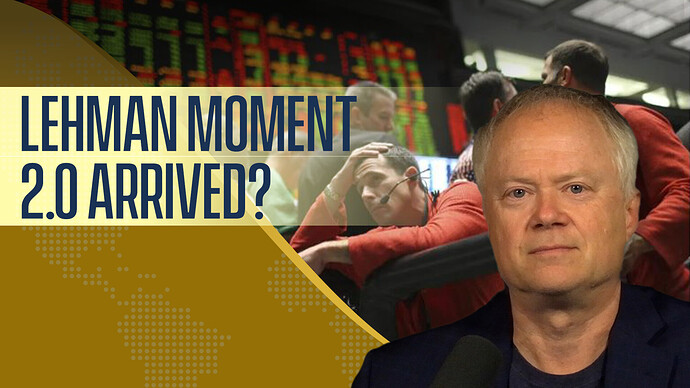 Greatest Financial Crisis 2.0: The Reckoning is Upon Us!

Okay folks, this is not a drill. Decades of stupendously poor monetary, (lack of) regulatory actions, and a completely useless watchdog press have now (once again) conspired to deliver us into the teeth of another financial crisis. This one will be...

If the Sunday a.m. ‘Trending’ stories are to be believed [*] then Quasi and Liz might not get the backing of MPs for their wizard scheme. Gove has described tax cuts for the wealthy as Jolly Well Not Cricket, paraphrase, and might be signalling a potential rebellion. Which is comical but also deeply worrying if it is so clear so quickly that these people simply can’t tell their arse from their elbow.

[*] Believable only in the sense that the Sunday a.m. Trends are usually the test bed for how things might pan out soon. Not believable in any sense that is a synonym for “true”.

Andrew Cockburn alleges that when Biden had a chat with Liz on the sidelines of recent UNSC he described her afterwards as “really dumb”. Pedo Peter does have a lucid moment now and again, so you never know. (Pedo Peter was the name saved on Hunter Biden’s 'phone contacts list instead of, you know, Dad or Pops.)

Even Biden Noticed That Truss is Stupid 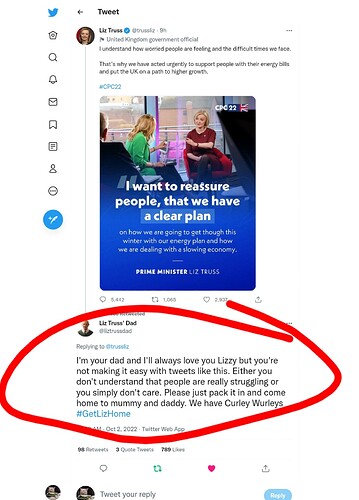