More dusty-dry (but dynamite as ever, once grasped) insight from Gail Tverberg. Unless you have Evvy’s aptitude for seeing the patterns in statistics, you might find this a bit too dry for easy reading. In that case, just concentrate more on the graphs which Gail (the actuary, remember) offers.

The broad conclusions are straightforward:

One: The world is now grinding along on the Peak Oilers’ famous ‘bumpy plateau’; and even that is now trending downward.

Two: The key factor is world per-capita energy consumption, and that is now trending downwards. Note that this factor depends closely on population-growth, which tracks per-capita energy closely - always. What we have here, in other words, is a classic species population-overshoot episode, which is right now hovering close to its zenith, before beginning its - innate, inevitable - downward slide, as energy becomes less available. That’s to say: the burgeoned population has now cleaned out the original commodities bloom that enabled the Industrial Revolution (and its inevitable population bloom). We’re now down to crumbs and barrel-scrapings (despite brief local plenitudes of energy, such as Russia’s currently). This simply can’t last.

Three: The key factors which one must grasp firmly, to be able to see plainly what’s really happening behind the moronic obfuscations of the Permanent Bullshit Blizzard, are EROEI and EROCI: Energy returned on both energy and (real) capital invested. Small local upheavals, like the SMO in the Ukraine only have the most minimal impact on these overall trends. Real capital means not idiotic delusion-generating things like bits of printed paper and computer pixels, but steel, copper, hitech machines, etc. that have to be supplied to make the increasingly-difficult and costly extraction of fossil-hydrocarbons possible at all.

Four: an issue broached with surprising rarity, considering how critical it is: a barrel of the thin syrup got from fracking contains LESS energy than a barrel of SLEG: sweet, light, EASY-GET crude; and lighter-fuel-grade fracked oil needs to be cut with heavy oils to give the most - critically - important refinery products: diesel, ship-bunker oil, and aviation kerosene. Otherwise it’s not a lot of use. The pro-frackers never confront these awkward realities.

And finally: there is no - repeat NO! - actually-feasible alternative to fossil-hydrocarbons visible anywhere on the energy horizon. Lots of cloud-cuckoo-land sci-fi, but buggerall that’s actually feasible.

Have a good day; you’re welcome! 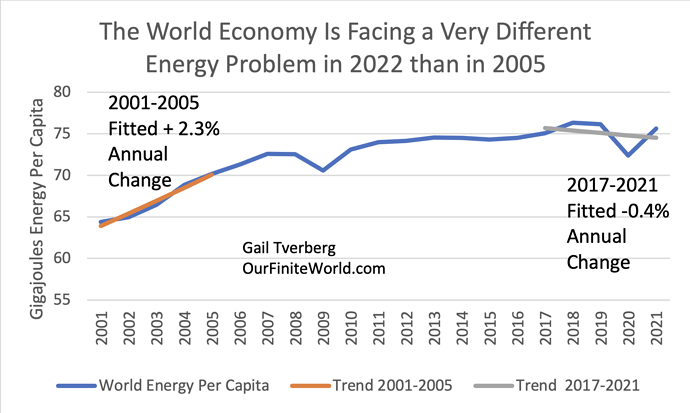 Back in 2005, the world economy was "humming along." World growth in energy consumption per capita was rising at 2.3% per year in the 2001 to 2005 period. China had been added to the World Trade Organization in December 2001, ramping up its demand...