Yes that was a much better example.

Pat, one of the infamous ones in recent years was at the Bataclan theatre, during the ‘Paris terror attack’ in 2015 (there’s a whole backstory behind all that, including the chief police inspector, who headed the official investigation of the event, who lived just down the road from me in Limoges, and who mysteriously committed suicide before the investigation was completed - again, look it up if you don’t believe me).

But getting back to the Bataclan Theatre, where a band called The Eagles Of Death Metal were performing, a band that no one had ever heard of, we were shown mobile phone footage of a heavily pregnant woman, hanging on her fingertips from a second storey window sill, for the best part of five minutes; this on a freezing November evening. Amazingly, just as this heavily pregnant woman was about to be rescued, the phone footage dipped down into the street below, where nothing much was happening.

As far as I’m aware, this heavily pregnant woman, with very strong fingertips, has never given an interview. I can’t now find the original footage. This news report shows some of it… 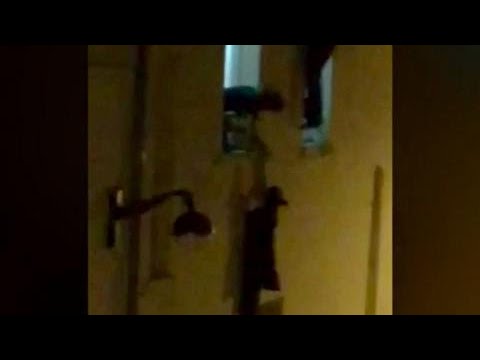 And as an aside, a few months after the Bataclan Theatre attack, The Eagles Of Death Metal (an American group) were permanently banned from entering France again. I’ve no idea what that was all about.

As usual, you couldn’t make this shite up.

Yeah I remember that one. This thread could go on forever. Nice, Sandy Hook, London 7/7, Westminster Bridge, Boston marathon and I’m sure there are plenty more on this list which I’ve either forgotten or just can’t be bothered with. But of course no one except those that have taken the red pill will even know what we “cospirithy theorists” (h/t @RhisiartGwilym ) are even talking about.

It’s a portmanteau, Pat (like the one that had Narnia in the back):

It’s such small, silly pin-pricks, constantly repeated, which help to take the piss out of the propagandists, and so burst their (piss-filled) bubble.

Now there’s a spectacularly-mixed metaphor if you like! Golden showers everywhere!