H/t johnlilburne at The Lifeboat News:

Worryingly (I don’t mean the Ricksecker tweet - I can’t make head or tail of what Twitter is doing here - I mean the tweet from Prof. Pagel about Omicron making young children ill):

@chrischirp
In England we've had more admissions in <18s with Covid in *first 9 days of this year* than the whole of the first wave. Most increase in <5s. Under 12s are unvaxxed. There might well be non-worrying explanation, but we too need to urgently understand what is happening. 4/4

Hi @Twirlip, like the UK unions the French unions seem to want their kids put into glass bubbles to avoid the dreaded omicron!
" France’s school staff – school workers, including teachers, aides, principals and inspectors at both primary and secondary levels – will mount a nationwide strike in protest at the French government’s Johnson-like refusal to provide anti-Covid mitigations in classrooms. The Macron administration instead announced on Monday – after the strike was announced – that it is relaxing school rules even further, despite soaring Omicron infections and the persisting Delta strain, baffling experts who, as in the UK, have been recommending urgent and far greater measures to limit the spread of the virus."

It makes completely no sense, unless they’re trying to expose the teaching unions as the simpering ninnies that they are?

As for Pagel, she leaves herself the “non-worrying explanation” get-out. How about the wards aren’t full of anyone else so they may as well admit a few poorly kids? When triage “had” to be tighter, because people were stuck at home following the advice to avoid ibuprofen until they really became ill, kids were either not being admitted or more likely not being ferried in in the family Espace by their mummies in the first place.

Here’s all you need to know about Ian Ricksecker 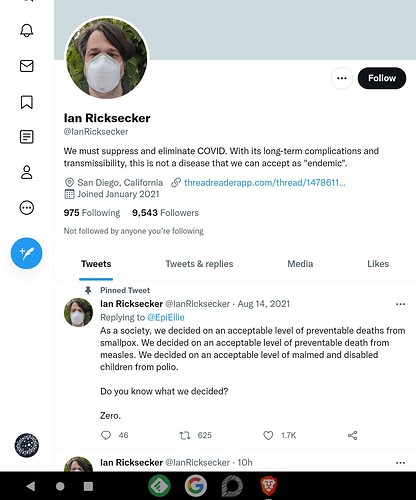 Here’s all you need to know about Ian Ricksecker

Much more to the point (because I already specifically said that the Ricksecker tweet was not what I was responding to - and I have no idea why Twitter inserted it into the snapshot, as it was not one of the tweets in the thread I read), here is all you need to know about Prof. Christina Pagel (of Independent SAGE fame, apparently, not that I knew): 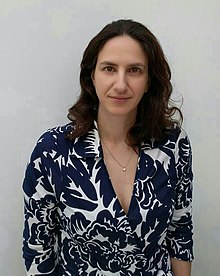 Christina Pagel (/ˈpɑːɡəl/ PAH-gəl) is a German-British mathematician and professor of operational research at University College London (UCL). She is the first female director of the Clinical Operational Research Unit (CORU) at UCL, which applies operational research, data analysis and mathematical modelling to problems in health care. Pagel also holds an honorary researcher position within Great Ormond Street Hospital. Pagel graduated with a BA in Mathematics from The Queen's College, Oxfor...

(We are supposed to be concerned with media criticism, after all; but I’m afraid I have no theories to offer, myself.)

(FWIW, I’m still clinging to the hope that Omicron is the last gasp of the Covid pandemic, and the South African woman doctor - clearly neither a ninny or a dick, as we can probably agree - was right to express amazement at how the UK and others are panicking over it. But I can’t help worrying that there may be real reasons for concern. Calling people “ninnies” and “dicks” doesn’t help to bring clarity.)

[There was a technical hitch earlier, and I was unable to edit this post, in two attempts; or at least, there was a delay of minutes before edits were effected. The problem seems to have cleared up now, and I have deleted my post calling attention to it. I’ve just performed another minor edit, or at least, I hope I have!]

This post was flagged by the community and is temporarily hidden.

Turtle faced Sickraker needs to get a life - Virus Mania and others have debunked the official narrative that there are solid benefits from vaccination against those illnesses.

For the last time:

hi @Twirlip , sorry I missed your caveat, although my point about vaccines needs to be made at every opportunity as far as I can see.
I don’t twitter and couldn’t get the numbers from Pagel’s blurb but clearly someone needs to look at how they define ‘vaccinated’ - there is a move in the US to require people to have boosters before being regarded as being vaccinated, is it the same here for data purposes? And do the unborn due to pregnancy jabs ever make it into these stats?

Exactly CJ1, my son and daughter are suffering from maskism all day at school and the bullshit policies of ‘case tracking’ etc, and what do the teachers want?

More masks! More classes closed because one kid has a cold.

The teacher’s unions in France are the ENEMY of education and children’s health.

Incidentally, is it possible that Twitter (i.e. some algorithm of theirs) deliberately inserted an unrelated tweet by this Ricksecker fellow (whom I’d never heard of) into the snapshot of the thread, or am I just being paranoid?

All I know is that I read through quite a few tweets in Pagel’s thread, and then I shortened the URL, just for simplicity (because it seemed to be starting in the middle), and read quite a few tweets in the (very different-looking) thread that resulted, and in neither case did I see the tweet that so prominently and (to me) mysteriously appears in the snapshot above.

I’ve just double-checked, with the same result. (But the Twitter user interface feels horribly clunky, unnatural, and unfriendly to me, so it’s possible that I’m just not using it properly.)

hi @Twirlip , it seems that we must be very wary of these flatporns who knows what they are up to!

Hi CJ1. To be fair the Sickraker guy concedes that vaccines don’t reduce long covid symptom, citing an Oxford study. He seems a zero-tolerance, zero-covidder rather than a vax-seller, with at least 20 consecutive, constructed posts mainly around long covid. 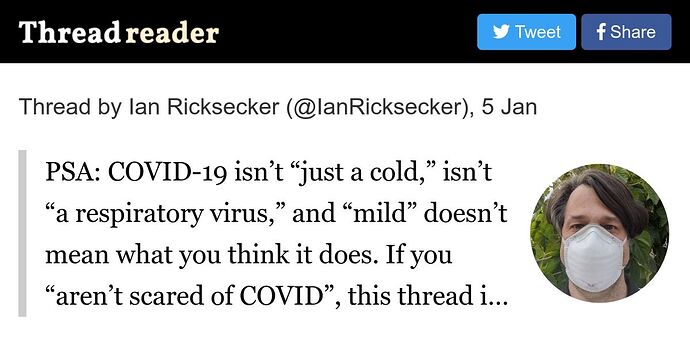 It looks quite impressive but there’s no context to them. You could do the same with selected research pieces opposing the narrative. I doubt it’d survive on Twitter anyway.
Cheers

Hi @Evvy_dense , thanks for the thread, I still get an overall impression of pro- vaccine, fear, and trust the BBC & WHO
:
“Anybody currently exposed or worried about their personal risk of Long Covid will be happy to read that the study found 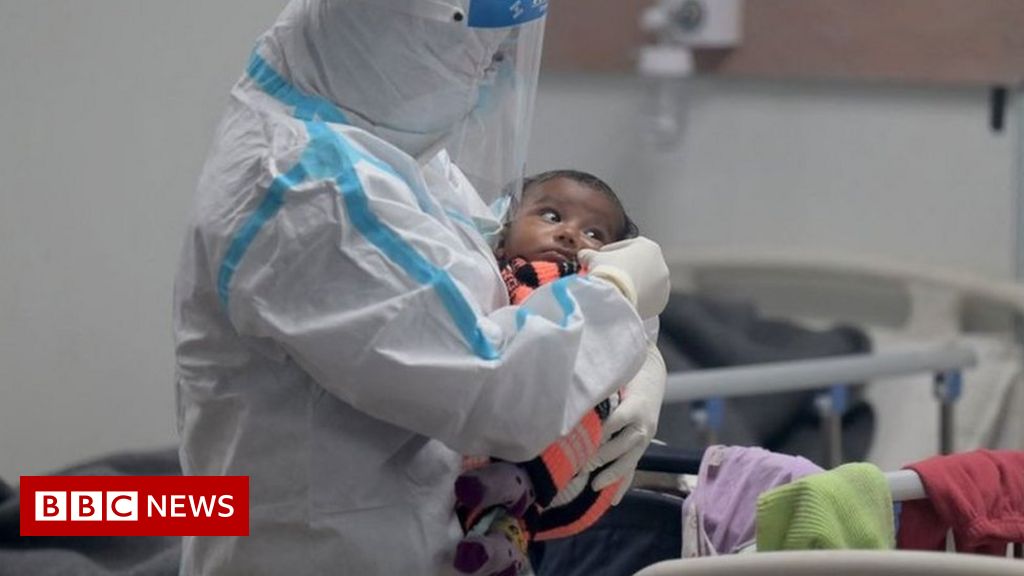 Covid: Deadly Omicron should not be called mild, warns WHOThe WHO cautions that just like previous variants, Omicron is hospitalising and killing people.https://www.bbc.com/news/world-59901547”

no analysis of side effects of jabs or alternative treatments like hcq and ivermectin, and of course no questioning of official stats.

Yes he’s still fearmongering. I got the impression he just latched on to that Twitter post by someone who has a following. He’d put a lot of effort into his ‘presentation’. Vaccinolgists might call it a ‘vectored’ delivery!