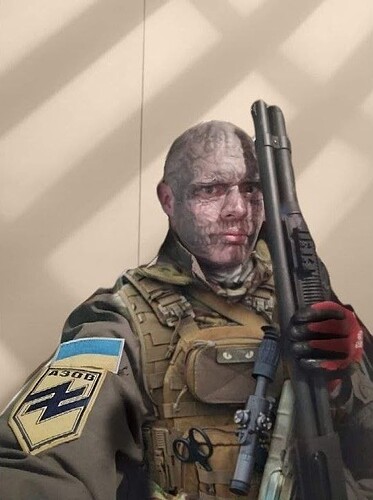 The first time I learned about Kent McLellan "Boneface" was through the investigation of Vasily Prozorov a former employee of the Ukrainian Security Services now uncovering the hidden truths of Ukraine on his channel UKRLEAKS. Then...

‘Enlightening’ yes…and terrifying in equal measure. The absolute state of that martial mentality. Still, there is some stark honesty there - particularly this:

How do you see the conflict from a geopolitical perspective?

American meddling in Ukraine has caused the Russian invasion.

Ukraine war can be simply placed by two prospectives, the Nationalist war, and Zelenski’s war.

Zelenski is the powers which be, and the Nationalists are the obvious.

It needs to be noted that;

The Ukrainan Government has tried to bench Azov, and the DuK on three different occasions. Once their usefulness for the NATO regime ran out.

The head of the Right Sektor even said before he was assassinated in Kiev: “We’re not finished yet, in the Maidan”.

This is clearly World War three.

I would like to see Russia just go home, and while the government in Kiev is frail another (Maidan) revolution.

I don’t see Russia as the victim here. But I do see Russia as provoked. Beyond all realms of reason, people have to be able to see that not everything is black and white here.

In fact this war only helped us get denied for NATO. No one wants that war with Russia.

I don’t believe that Ukraine has any issues in the future with Russia nuclear capability. Russia can handle a loss to Ukraine, but I don’t for see Russia handling a loss if NATO jumps in this. Does that make sense?

As long as the war stays in Ukraine, I think nuclear war isn’t in the goal post.

Yes Si. Always worth hearing what the other side of the aisle thinks. Dmitry Orlov asserts that Russians always talk to everyone, including their most rabid enemies, because it keeps all our lives rubbing along together.

There was a time when I could have sympathised more with Boneface, at least in his commitment to patriotic nationalism - to Cymru and the Cymry, in my case. And I still can’t help noticing his bravery and dedication, and his commitment to a very tough path. A hundred-percent wrong-headed in terms of his soul’s thriving and growth, of course. But still worthy of recognition for its admirable elements.