I’d rather be doing fun stuff about music. Unfortunately the world still turns.

I’ve hesitated with this one, because in parts it is very difficult/grizzly viewing. So be warned.

This one hour long documentary, just recently released, is basically a compendium of clips that many of us will have seen over the last year or so. I think it’s good that it’s all been brought together in one place in this documentary. It gets off to a bit of a slow start. Other than that I can verify everything that’s said/shown here… 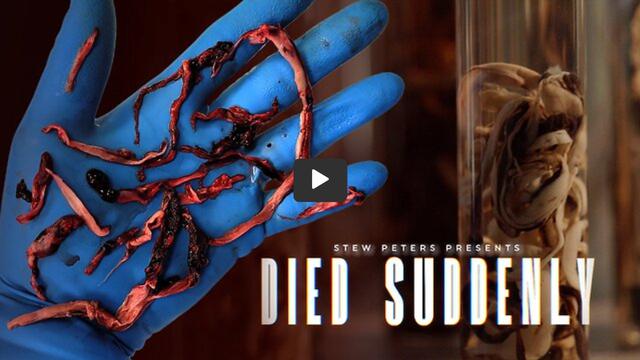 "DIED SUDDENLY" The Truth About the Greatest Ongoing Mass Genocide in Human...

HIGHLY recommended new documentary from the Stew Peters people about the depopulation injections marketed to the people as being "vaccines." Why do we never believe them? For centuries, the global elite have broadcast their intentions to depopulate …

There’s an awkward entanglement that’s happened over the population thing, that I notice coming up more and more; it’s this:

Point one: the human species has been in a growing population-overshoot event since at least the time of Parson Malthus, which is why he was on to the overall reality of that so correctly, although - as is so usual with we hasty humans - he got the timing wrong. These processes - all kinds of clearly-growing problems - fool us like that, typically growing on a Gaian or a geological timescale; whereas we, especially the Hollyshite indoctrinated, expect it all to be completed in something like a weekend.

So, our overshoot has been growing at its own pace, and that growth has been extended by various ingenious techie-reponses that we’ve devised, like public health, better food, much more, intensively-cultivated food, hyper-techie medical tricks, and so on, all of which have lifted the number (and the life-expectancy) of people who can be crammed onto the planet; somewhat - for a very limited time, that is.

Amongst the key factors that have enabled this artificial increase in our overshoot, before the final reckoning begins to bite, has been the amazingly-close way that human numbers track exactly with per-capita energy use: the more energy available and used, per person on average, the more excess numbers we can go on sustaining - for a short extra time.

This is not surprising, once you grasp deeply the primacy of oodles of cheap, easy-get energy needed to drive - well - everything. Virtually every damned thing we do requires actual physical energy (at exactly the right time, of the right kind, supplied precisely where and when it’s needed, like diesel injectors shooting their precisely-calibrated doses of ‘solid’ (zero entrained air) oil-spray into the cylinders at precisely the right moment in the ‘suck-squeeze-bang-blow’ four-stroke cycle.

NOTHING gets done on this planet without that sort of actual, physical energy transaction driving it. (Muse about it a bit; see whether you can think of anything AT ALL that’s exempt…)

And now, of course, fossil-hydrocarbon energy - literally the one and only sort of available energy that has been able to drive and sustain our burgeoning numbers, and our burgeoning demands on the lifeweb of the Earth - is on the dwell of it’s all-time production zenith: the ‘bumpy plateau’ of the peak-oilers. There is absolutely no credible - key qualifier! - alternative source of energy readily available right now to take its place; literally none at all. And now it’s about to get much dearer, and more restricted, than before. Permanently. Per-capita use is on its inexorable way down again.

OK, cut to the other issue: Since Malthus’s time, at least, there have been gics who want to cull their cattle - which is what we commoners are in their ludicrously superiority-complexed minds. Over the past century or so, this has manifested as the eugenics tendency: people who fantasise about how they might reduce our numbers drastically, by force; and moreover might selectively choose who of the survivors may breed and who may not - to ‘improve’ the species; in their image, presumably. Utter shits all, obviously; the gatesoid tendency.

All this means that we are now in steadily-deepening deep shit.

The entanglement, though, is that lots of - well, let’s say just shallowly-informed people - immediately jump to the idiot conclusion that anyone at all who tries to point out the objective reality of the overshoot, and of the well-studied ecology of the natural processes which both kick them off and cure them, is immediately shriekingly-attacked by the anti-eugenics obsessed. I cop this sort of hysteria all the time over at Off-G, where the editorial team have this truck-wide gap in their understanding of population dynamics, garnished with a strongish dose of cornucopian startrekkytechietechie thinking, poor buggers! (Let me be clear: I despise and oppose eugenics absolutely, too. But not to the point where it makes me refuse obdurately to see the obvious human overshoot now at or near its peak. Bugger that sort of hysterical fanaticism!)

So - the eugenicist bastards too see the objective fact of our current, non-sustainable overshoot. And they think this is their action call to start a serious global cull. They may well succeed in reducing both fertility and absolute numbers to a limited extent, with the vast scam of the poison-stabs. They will not, however, have any magisterial effect on the natural processes of overshoot-resolution, which is now either already just begun for hom sap, or imminent. Not only are we not collectively capable of deciding to reduce our numbers voluntarily and - above all! - humanely and justly; truth is, we probably couldn’t do it as surely as the natural processes will, anyway.

That brief - actually disapproving - showing of the Meadows team’s ‘Limits To Growth’ curves, in the documentary, shows the probable paths of the five key factors that the study actually traced; population being one of them. And TLTG has placed the timing of our spontaneous reduction of numbers really getting going in the middle decades of this century. And btw, though we’re still awash with easy, substanceless claims that TLTG was rubbish, and has been ‘comprehensively debunked’ (hah!) the realworld fact is that it’s been closely on track from the early seventies, when it was published, till right now.

So sure, we should finger all the crooks, at whatever level, who’ve had a hand in pushing the eugenicists’ covid racket, and haul them before Nurnberg 2 tribunals, there to kick the shit out of them - figuratively speaking natch; I’m on record as preferring the milder retribution of stripping them of all ill-gotten gains resulting from the scam, followed by substantial periods of compulsory community-service labour, to make amends and rehabilitate themselves. This would go not only for the actual criminal plotters themselves, but all the bamboozled and fear-stampeded useful idiots, and all the goalongtogetalongers, who compounded the disaster with their cooperation.

This vid - ‘Died Suddenly’ - has been for me another push towards the Mike Yeadon position: that enough insight into the whole covid racket makes it ever clearer that the ultimate, underlying purpose of the inner core of conspirators was a grand global cull of ‘surplus humans’. People like me, of course…

Thanks again for the headsup, Rob!

It has definitely attracted attention Rob. The twitter thread was dominated by the huffy/aggressive virtuous types brandishing the usual insults and screeching that covid causes these deaths, not the precious elixir.

So, a key gic strategy at work here as usual: get the plebs arguing round and round in circles amongst ourselves; keeps us occupied…

…And possible use of a bad actor to front the thing. I gather the docu is created/fronted by Stew Peters? He has always struck me as a bit of a cut-out.

He was one of the “snake venom in the jab” mob wasn’t he? In other words someone who injects into the narrative deliberately stupid and easily disproved accusations to discredit all “antivaxxers”.

See also the PR minion with the Nazi flag amidst the Canadian Truckers’ protests, and myriad more.

Sorry to be negative but I suspect this documentary may not be what it seems.

What, you mean those folk mentioned didn’t die? Or they were faking the faints and the dreadful tremors? Possible; doesn’t feel very convincing, though.

It’s true too that there have been all sorts of wild assertions clouding round the basic question of the legitimacy of the deadly-pandemic/poison-stabs circus; snake venom, ‘horse-paste’ and such. And it’s caused a lot of confusion, and confused cross-argumentation; though I tend to see that simply as an effect of the chaos which surrounds the whole issue of the scamdemic and the stabs; quite possibly chaos stirred up deliberately.

Also I too reserve judgement about Stew. Someone should try doing a follow-the-money on him; see whether it finds anything iffy. But still, chuck out the mucky bath-water by all means, but do we really believe that there’s no baby of truth in the vid? I don’t.

KarenEliot, I agree with what you’re saying, particularly with regard to Stew Peters.

Thing is, this documentary is basically a compilation of clips over the last year or so, from all over the world, that didn’t originate from Stew Peters.

I dunno, maybe this documentary is some kind of psy-op, putting together widely disseminated info and then associating it with Stew Peters, in order to discredit it?

It’s hard to tell what’s what in the hall of mirrors we find ourselves in.

Rhis, I find one of the most disturbing things about it is all the video clips (and there’s now a huge number of them) of victims who turn their head round to the right and point up at something before keeling over.

I’ve heard a lot of medical professionals say that this sometimes happens when people have blood clots on the brain. Again, I dunno, All I can say is that it’s a very strange phenomenon that I’ve never seen before.

I noticed that too, Rob. Really striking! My first thought was: ‘They’re being visited by a terrifying flying demon, in the air just above them!’ Quite extraordinary behaviour, clearly repeated by several victims.

Oh gosh, yes, I’ve seen a few of those clips. The gentleman on the railway platform will haunt me a long time. And the notion that some demon was suddenly visible to the victim, but presumably no one else, struck me too.