This new one may resonate, analysis of the ingredients in light of reports on magnetism.
Cyborgs R Us: The Bio-Nano Panopticon of Injected Bodies.

Thanks @dbroudy I didn’t read it all but have simplified the conclusions for anyone short of time. Well worth a short read.

… We are reminded of Harari’s admission that scientific pursuits are, foremost, not about acquiring empirical truth about the world, but about acquiring worldly power. To “trust the Science™” is to trust its agendas and outcomes set by power-hungry people.

If we can take care to ponder how political power “must involve itself in the process of capital accumulation by either mystifying its policies and calling them something they are not, or trying to conceal them, as well as how the public must be kept in relative ignorance of weaponizable scientific research, we can then begin to see the actual reasons behind the bio-nano invasions of human bodies and the proclamations emanating from the Scientific Establishment™.

The Bio-Nano Age demands the financialization and commodification of all biological agents. All levers of power must, therefore, work to manage the human inventory at all available levels of control. It may seem, at present, that human beings are losing the struggle against the dehumanizing forces of anti-human trans-humanist tech Giants. But Yuval Harari’s grandiose rhetoric can also signify desperation. The antisocial global transhumanist movement, we suggest, is certain to annihilate itself and its adherents. The movement itself reveals how it is determined to fall into the pit it has dug in which to bury others. It appears to be fully blind to its own unwillingness to account for the full scope of human creativity, versatility, adaptability, and collective will to face and surmount threats.

When power so intoxicates itself that it abandons rational thinking, morality, and empathy, it embarks on a malignant self-destructive trajectory.

On my way out, so will read the full article later but there’s a killer phrase in the abstract: “highly compartmentalized epistemic communities”. Yes, and with such tightly patrolled boundaries. Self-driving cars that cannot change lanes are being worked on right now, with regular disastrous mistakes, but hey: practise makes perfect. That is the prototype for the nano-engineered single-purpose cyborg right there.

In @PatB’s precis, thanks Pat, another phrase that made me wince: human inventory. Also spot-on.

This image has been memed many times but seems wholly appropriate. Metropolis was made in 1927 but was supposed to be a warning, not a project plan… 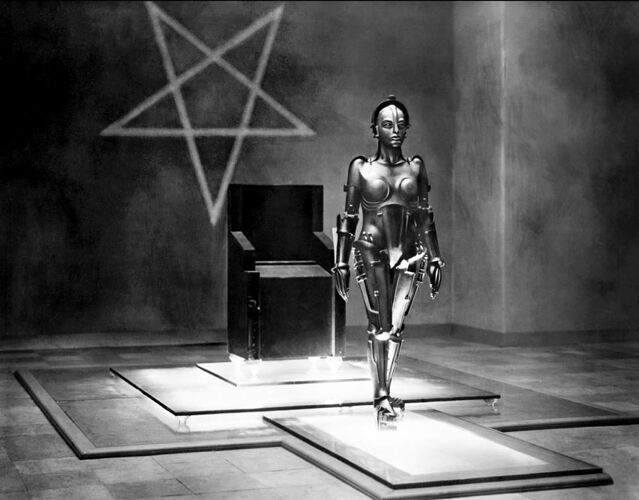 Thanks @dbroudy for posting the link to the article, which I’ve now fully read. Your points about “predictive programming” (not a phrase used in the article itself) are very well made. These gel closely with the from-the-hip image I posted earlier, from Metropolis: the anticipatory propaganda for transhumanism really does seem to go back that far.

The depth of Yuval Noah Harari’s duplicity really became apparent in the article, he/it seems to have no conscience at all.

Playing about with bits and pieces was another powerful phrase, but most of all “under the skin”. (Referring to bionanotechnology that could send beacon signals to devices, be these geolocation data, temperature readings, or subversive thoughts…)

The Michel Fabre book of that name (SPOILER ALERT) relates how an alien being, with a human veneer, works on Earth to entice humans (particularly useless ones: druggies, football fans, disabled people) to what turns out to be a processing facility. The film, with Scarlett Johansson perfectly cast as a cold emotionless creature, is not quite as explicit but is outstanding too.

As for Network it really is time I watched that film already!

Totally agree! Incidentally, we did a music video a few months ago featuring clips from Metropolis, which illustrates quite powerfully the kind of cultural conditioning we’ve been exposed to in the Western culture for many decades.
Harari seems almost completely devoid of conscious awareness of what he’s actually saying. What’s really weird is how seriously people everywhere are taking his prognostications. The first time I witnessed a pet getting implanted with a microchip so many years ago, I found it completely revolting and knew in that instant the human chip implanting wouldn’t be too far behind.
We dealt with this peculiar history in a 2020 paper for Frontiers.

Who wants to be a slave? Downloaded, thanks.