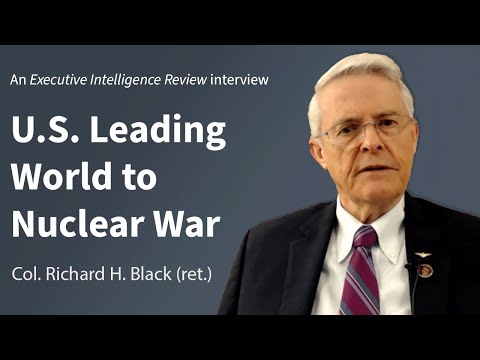 Straight truth from a retired US army Colonel on Syria, Ukraine and the Doomsday cult running the US

Have watched the first half hour or so, so far. Sterling stuff.

One hopes that there are others like him in the US Military now.

I think that there are. And I suspect that when it gets to the point that the neocon loonies are about to trigger a nuclear war, it will be people like this - in the Pentagon or retired from it - who will arrest the loonies at gun-point, possibly shooting the odd one, pour encourager les autres, and thus trigger a coup-d’etat in Washington.

I imagine, too, that such sane people would have no great difficulty talking REAL negotiations with their opposite numbers amongst the Russian general staff brass; nor with talking turkey with VVP and his ruling circle. Just as the Russians have been trying patiently to do ever since the neocon loonies set off the disaster in the Ukraine.

Nuclear weapons have a shelf life of five to ten years. This is because the uranium or plutonium in the warhead degrades over time, and it has to be replaced if you still want to have a workable nuclear weapon. I can’t now remember the exact year, but during Obama’s presidency he announced a $1.3 Trillion upgrade of the US nuclear missile inventory. Most of this was replacing degraded fuel in nuclear warheads.

It goes without saying what you could do with $1.3 Trillion in a sane world. 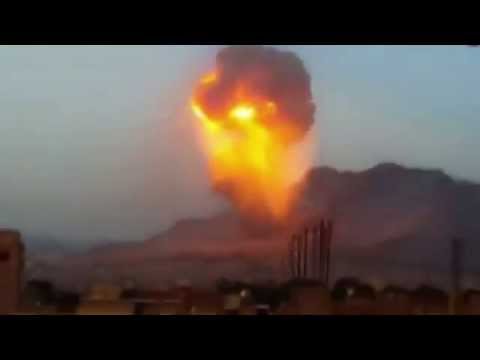 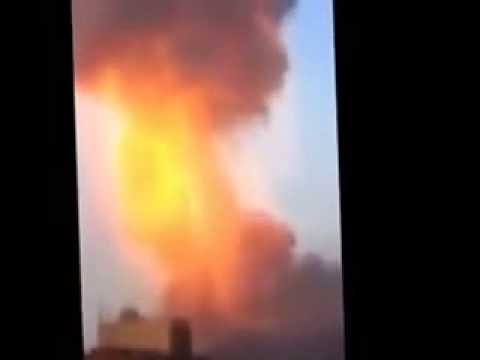 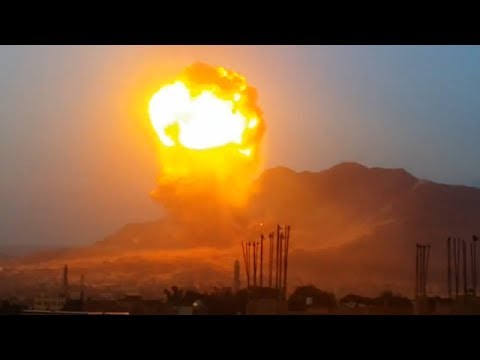 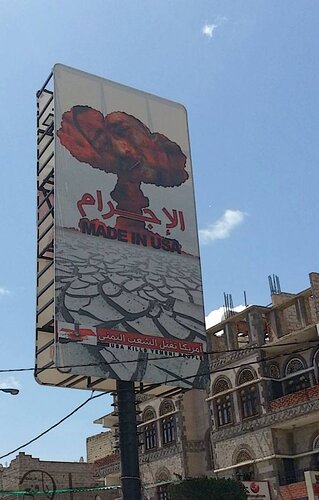 “…clearly the opinion analysts and manufacturers (both inside and outside), of The State Dept. have been exercised by the questions (and this for some time); “Does the public (both at home and abroad), now consider a limited nuclear exchange (or the asymmetrical use of such weapons in specific circumstances), to be a different animal to that of a full strategic exchange?” …(and), … “Can we make the limited “battlefield” (a somewhat loose term as applied here), use of lower yield nuclear weapons acceptable?” So perhaps the PtB thought; “We’ll let the Israelis drop one of theirs on Yemen and see if anyone jumps!” Outlandish? Not really when one considers just how much time and energy has gone into both the continuing Korean War and preparing for possible conflict with Iran, to put it in cold economic terms; “It’s worth a lot more than are a few more dead or outraged civilians in one of the poorest countries in the world” (that’s “to them” of-course). Maybe it’s a bit of both though (as usual in-fact when it comes to U.S foreign policy), with the right-hand not really knowing what the left-hand is doing.
Politicking is just that, however, international law states that if the Saudis and Israelis dropped a tactical nuke on Yemen this was a criminal act and a case should be brought against them and heard under the fullest of international and public scrutinies.”…

“Netanyahu; “I know what America is. America is a thing you can move very easily, move it in the right direction.””…

"“British Foreign Secretary Philip Hammond told parliament Tuesday that Israel would not have been satisfied with any agreement world powers reached with Iran, and announced he was heading to Israel to personally explain the nuclear deal to Prime Minister Benjamin Netanyahu.”…

"Meeting a day after Hammond slammed Netanyahu for his outspoken opposition to the Iran nuclear deal, the two discussed the terms of an agreement branded by Netanyahu as a “historic mistake.”

“The question you have to ask yourself is what kind of a deal would have been welcomed in Tel Aviv. The answer of course is that Israel doesn’t want any deal with Iran,” Hammond told lawmakers. “Israel wants a permanent state of standoff, and I don’t believe that’s in the interests of the region. I don’t believe it’s in our interest.”" Netanyahu rebukes UK's Hammond for 'failure of diplomacy' on Iran | The Times of Israel 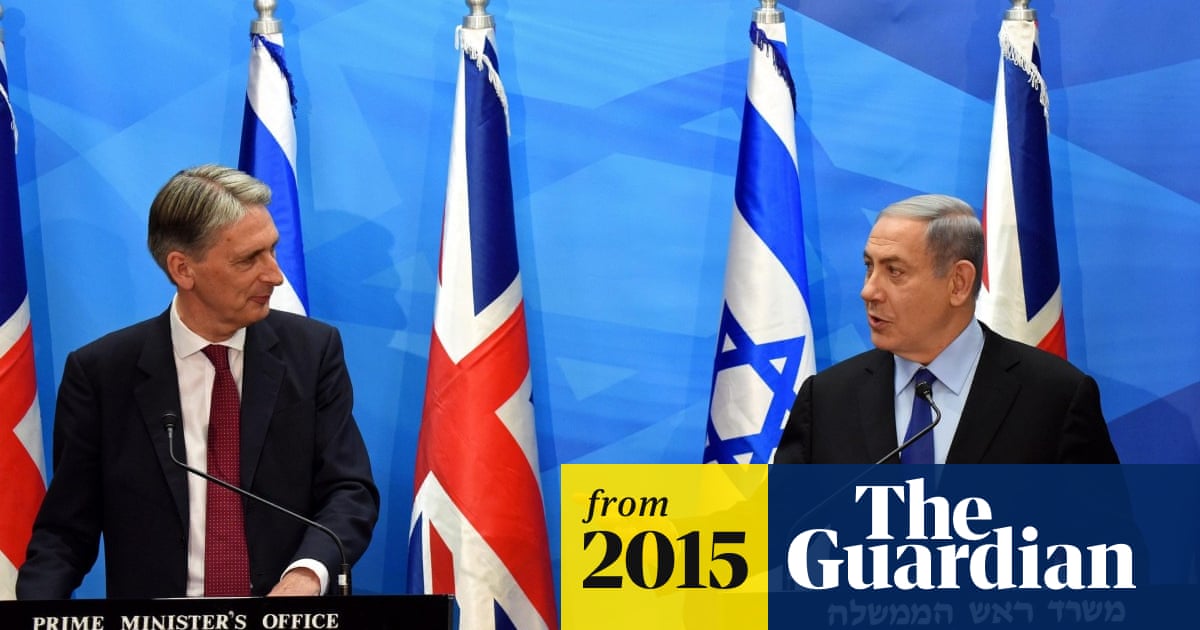 "Netanyahu and Hammond each read from their notes before engaging in an awkward back-and-forth that extended what is usually a standard, brief public appearance with visiting officials into a spirited debate.

The spat reflected how Israel, which has long lobbied against the deal, stands at odds with other world powers over the agreement, especially because it does not require Iran to temper its hostility toward Israel, or rein in support for some of Israel’s enemies, including the Lebanese Hezbollah militant group." Netanyahu and Hammond spar over Iran nuclear agreement | Israel | The Guardian 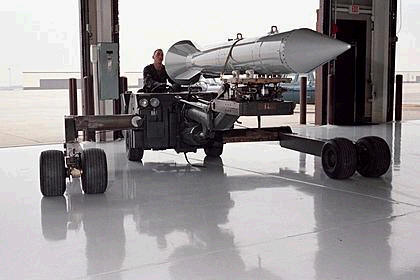 GKH, very interesting stuff. They test all kinds of shit in places like Yemen, and I do think they were trying out small nukes.

However, I’m suspicious of the footage because any nuclear weapon when exploded will produce an emp, which will fry any digital device.

The old footage we see of nuclear test explosions in the Pacific (there’s a whole story there) was recorded with non-digital cameras.

That said, there’s some fascinating footage taken in Pripyat in the immediate aftermath of the Chernobyl disaster. It was done on an old-fashioned cine camera. The radiation levels were so high that you could see the technical effects on the cine tape.

I’ve no idea if the camera man survived.

Interesting what he had to say about the calibre of senior military personnel. It’s exactly the same as has been spoken about several times recently on UK Column in relation to the UK’s own ‘defense’ forces.

Hmm EMP…large enough weapons do (usually used at altitude if being meant to produce EMP), and most vulnerable are devices linked by the same networks (Ethernet or power-supply, usually both), …you can see pixelation on the digital images…also remember the explosion was largely under-ground…I see no way all of these bits of footage were photo-shopped (see vid.3), …, furthermore, both the alt and mainstream media have ignored the fact that the Yemenis themselves (incl. the press corps), have stressed the “unusual” nature of the explosion and contend that it must , therefore, have been nuclear in nature…and you can clearly hear one of the female residents of Sanaa cursing the Arabs as the explosion took place…