Why the NYT and the Washington Post have been allowed to do actual journalism on this is a mystery to me, as is the BBC featuring it on their website; indeed, if you google ‘kabul drone strike aid worker’ the story is now common currency. Maybe a twisted sense of remorse given the date?

One of the final deadly strikes by the US in its 20-year war in Afghanistan has been challenged by investigations in leading US media.

The New York Times and Washington Post say the strike the US said targeted an Islamic State operative actually killed an aid worker on daily duties in Kabul.

They say their evidence undermines US military reports that explosives in the targeted car caused a secondary blast.

The Pentagon said it still believed it prevented an “imminent threat”.

The strike on the vehicle on 29 August by a Hellfire missile fired from a Reaper drone killed 10 members of one family, including six children, relatives told the BBC.

The US military was on high alert as, three days earlier, a suicide bomber had killed more than 100 civilians and 13 US troops outside Kabul airport as civilians and officials were evacuated amid the Taliban’s takeover of the capital.

The 20-year mission for foreign troops ended with a final US flight out on 30 August.

The Times and the Post analysed video and photographic evidence, spoke to experts and witnesses, and both concluded that the evidence suggested there were no explosives in the vehicle.

The US military has said it did not know the identity of the man targeted prior to the strike but that he was believed to be associated with the Afghan branch of the Islamic State group.

The chairman of the Joint Chiefs of Staff, Gen Mark Milley, at the time called it a “righteous strike”.

The Post and Times confirm the target was Ezmarai Ahmadi, 43, who worked for the California-based Nutrition and Education International (NEI) aid group and was applying for resettlement in the US.

The Times reports that the US military believed it was tracking a white sedan from an IS safe-house and intercepted communications that led to several suspicious stops that involved collection and delivery of items.

One collection, US officials say, appeared to be heavy packages that might contain explosives.

The paper says it has studied security footage that shows Ahmadi was picking up laptops and also water canisters - as there was a shortage of water - which a colleague said was a typical day.

Ahmadi later drove home. US drone operatives reportedly saw him talking to one other male and decided to strike. But family members then gathered around. The youngest child killed was two years old.

He denied the compound had any links to IS. “We’re trying to help people. Why would we have explosives to kill people?” he asked.

The Times says the local Islamic State group admitted to a rocket attack the following day - it was carried out from a white Toyota similar to Ahmadi’s.

The Pentagon has argued that a larger blast after the drone strike showed there were explosives in the sedan.

The Post and Times say there is scant evidence of this.

The Post sent images of the scene to experts for analysis. One, Ferenc Dalnoki-Veress, said it was highly unlikely there was a substantial amount of explosives in the car. He said fuel vapours may have trigged a secondary blast.

Post-blast assessments expert Brian Castner said the second blast was probably “just the car burning or related to the gas or oil”.

The Times quoted three weapons experts as pointing to the lack of nearby explosive evidence - only one dent on a nearby gate, no blown-out walls, no sign that a second car in the courtyard was overturned and no destroyed vegetation.

It has so far not given a full or final report on the drone strike.

Responding to the latest media reports, Pentagon spokesman John Kirby said the US Central Command “continues to assess” the strike but that “no other military works harder than we do to prevent civilian casualties”, Agence France-Presse reported.

“As Chairman Milley said, the strike was based on good intelligence, and we still believe that it prevented an imminent threat to the airport and to our men and women,” Mr Kirby said. 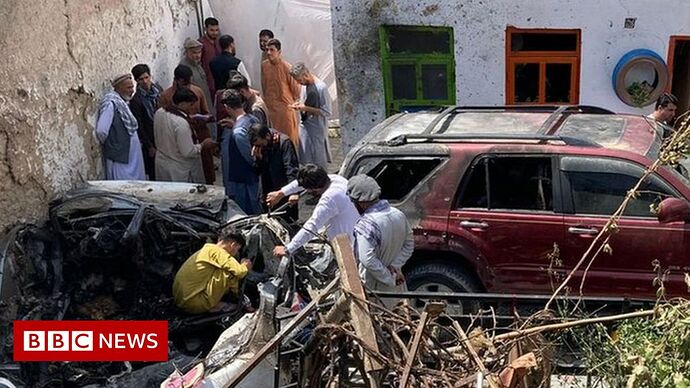 Media question both the intelligence behind the US attack on a car in Kabul and the claims of success.