Afghanistan: The End of the Occupation

A deep dive into the Afghan story which, even though it falters at times, seems to me to be one if the most grown-up pieces that I’ve read on the subject.

Lots of understanding of the nuances of the situation, and decent exposition of what this all looks like from an average Afghan’s point of view.

Lots of important points that impressed me:

This was not a lightning advance through the cities and then on to Kabul. The people who took each city had long been in the vicinity, in the villages, waiting for the moment. Crucially, across the north the Taliban had been steadily recruiting Tajiks, Uzbeks and Arabs.

But perhaps support is not the right word. It is more that Afghans have had to choose sides. And more of the Afghan people have chosen to side with the Taliban than have chosen the American occupiers. Not all of them, just more of them

The fact that more people have chosen the Taliban does not mean that most Afghans necessarily support the Taliban. It means that given the limited choices available, that is the choice they have made. Why?

The short answer is that the Taliban are the only important political organization fighting the American occupation, and most Afghans have come to hate that occupation

Over the last decade the Taliban have offered two things across the country. The first is that they are not corrupt, as they were also not corrupt in office before 2001. They are the only political force in the country this has ever been true of.

Critically, the Taliban have run an honest judicial system in the rural areas they have controlled. Their reputation is so high that many people involved in civil lawsuits in the cities have agreed that both parties will go to Taliban judges in the countryside. This allows them swift, cheap and fair justice without massive bribes. Because the justice was fair, both parties can live with it.

Yet in the United States that autumn, the mixture of vengeance and patriotism meant dissenting voices were rare and mostly inaudible. Ask yourself, as Saba Mahmood did at the time, ‘Why were conditions of war, (migration, militarization) and starvation (under the mujahideen) considered to be less injurious to women than the lack of education, employment and most notably, in the media campaign, western dress styles (under the Taliban)?’ [5]

Then ask again even more fiercely – how could you possibly ‘save Afghan women’ by bombing a civilian population that included, along with the women themselves, their children, their husbands, fathers and brothers? It should have been the question that ended the argument, but it was not.

Far more shocking, the feminist spin domesticated and effectively displaced the ugly truths about a grossly unequal war. And it separated those notional ‘women to be saved’ from the tens of thousands of actual Afghan women, and men and children killed, wounded, orphaned or made homeless and hungry by the American bombs.

We believe another feminism is possible.

There is a set of prejudices on the left which incline some people to ask how the Taliban could be on the side of the poor and anti-imperialist if they are not “progressive”. Leave aside for the moment that the word progressive means little. Of course the Taliban are hostile to socialism and communism. They themselves, or their parents or grandparents, were killed and tortured by socialists and communists. Moreover, any movement that has fought a twenty-year guerrilla war and defeated a great empire is anti-imperialist, or words have no meaning.

Reality is what it is. The Taliban are a movement of poor peasants, against an imperial occupation, deeply misogynist, supported by many women, sometimes racist and sectarian, and sometimes not. That’s a bundle of contradictions produced by history

Afghanistan: The End of the Occupation

Nancy Lindisfarne and Jonathan Neale write: A lot of nonsense about Afghanistan is being written in Britain and the United States. Most of this nonsense hides a number of important truths. First, t…

Not so much “random” as completely on-point I’d say PP. 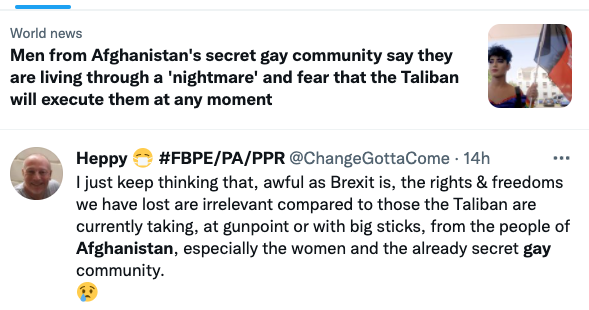 Agree, P. I thought it one of the best-informed items about Af. that I’ve seen, if only reduced a little by not being founded on hot, up-to-the-minute information, but nevertheless containing nearly-unique-for-the-West detailed understanding based on much close acquaintance ‘in theatre’. Meant to point it up here, but forgot. Your detailed look is exactly right, I’d say.