A Speech In The Australian Senate Reveals The Evil In Letting Vaccine Injured Suffer - 22 November, 2021

A breath of fresh air… 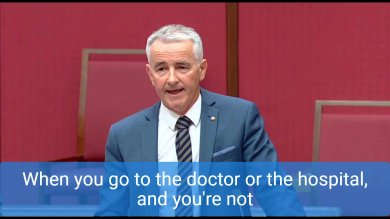 A Speech In The Australian Senate Reveals The Evil In Letting Vaccine Injured...

Thanks for finding this Rich, because our wretched delinquent media has barely acknowledged Rennick’s extraordinary contribution. THey simply can’t talk about vaccine injuries in relation to mRNA, or young men, or even ISRAEL, while they push and push to approve the wretched poisons for 5-11 year-olds. I’ve been hearing loads of stories from people in the Resistance, growing stronger every day, but not a frigging squeak in the public sphere or anywhere in the msm, except the Spectator.
The worst of it is people like Kristina Kineally who are so bloody woke they can’t think, except of the guy who reportedly made death threats against the psychopath Andrews. I’ll now share with my Australian friends!