The nature of sacrifice

A short review of David Cayley's Ideas of René Girard 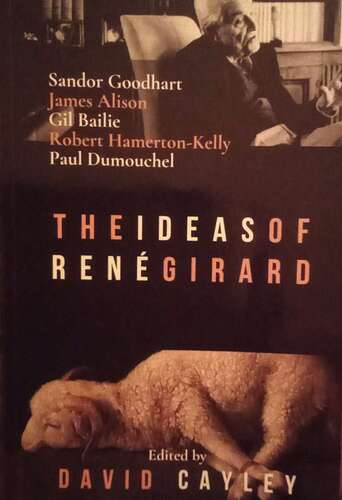 That ‘scapegoat’ is a sheep.

Ah, well, yes, but it’s Agnus Dei by Zurbaran (sp?) in other words the Lamb Of God, meaning Jesus Christ.

Briefly: Girard said that people imitate one another (flock together one might say) but this leads to tension and aggression. They want the same things, hence they come to be rivals. The allegory of Cain and Abel illustrates this.

Also according to the Old Testament, the sacrifice of children was rife at one time, supposedly to appease a wrathful God. Abraham was tested by God who asked him to sacrifice his son. He was willing… but God told him not to and to sacrifice an animal instead. Thus a change in culture was initiated.

The sacrifice of the scapegoat, whether goat or sheep, or person, was a way of defusing social tension by having the sacrificial victim ritually bear the community’s sins. By banishing/killing the scapegoat dangerous tendencies were defused and war was avoided. Jesus was a scapegoat. Witches condemned by Matthew Hopkins likewise.

If, instead of retaliating when an aggressor slaps my face, I turn the other cheek, the escalatory cycle that ultimately requires a blood sacrifice is broken. And that’s what the classic Biblical narrative is supposed to teach us.

So: the cover image might have been a picture editor’s poor choice, but I tend to think not.

Fast forward to 2020 and the wearing, or not, of facemasks. It was immediately clear who was conforming, and who was not. I don’t think i need to elaborate any further.

I know, K. I was just being silly.